Spirit Air, the low-budget airlines based in South Florida, is, at least in terms of advertising, a no-class operation. 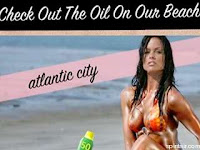 Spirit Airlines — they of the multi-year labor dispute and the charge for carry-on bags — would like to encourage you to buy tickets to Cancun, Puerto Rico, Atlantic City or Fort Lauderdale with a timely new ad campaign called Best Protection. The tag line? “Check out the oil on our beaches.” And you thought Haley Barbour’s tourism promotion campaign was offensive.

Spirit Air is using the new campaign to promote its sale fares to beach getaways unaffected by BP’s massive oil spill, and they’d like potential customers to know that the only oil you’ll find on those beaches is slathered on the bodies of bikini-clad women who will all stare at newcomers with come-hither eyes and pouting lips. Get it? Their oil will protect you — or, at least the scantily clad women you slather it on.

The campaign is, of course, as sexist as it is offensive to the residents of the Gulf Coast who are watching their livelihoods, wildlife and property values swallowed up in caustic and deadly crude oil as a result of the explosion aboard BP’s Deepwater Horizon and the subsequent spill. So, what better time for a few puns about what BP really stands for and some women you can objectify!

Yeah, call me humorless, but this is just not funny. And it would be just as bad if the model was a hunky guy in a Speedo; you’re a sexist if you objectify men, too.

There are any number of ways to include the BP disaster in promoting tourism; local governments are scrambling to get funding to do just that, and commercial enterprises can help. But this kind of exploitation and attempt at humor is just dripping with failure.