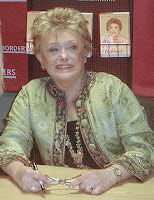 Emmy-winning “Golden Girls” actress Rue McClanahan died of a stroke in a New York hospital early Thursday, her manager said. She was 76.

McClanahan, who suffered a cerebral hemorrhage last Monday, was surrounded by family when she died at New York-Presbyterian Hospital, according to manager Barbara Lawrence.

The actress’ career began on the New York stage in the 1950s, but her long television career was first boosted when producer Norman Lear cast McClanahan in his hit CBS series “All in the Family” in 1971. She appeared in Lear’s “Maude” a year later.

Her most memorable TV role was as Southern belle Blanche Devereaux on “The Golden Girls,” which ran from 1985 through 1992. McClanahan won an Emmy for best lead actress in a comedy in 1987.

Betty White is the last surviving member of the four “Golden Girls” stars.

I had the pleasure of meeting Ms. McClanahan in 1986 when she was in Denver playing Flo in Gregory Harrison’s production of William Inge’s Picnic. She was generous, funny, and — in contrast to her character on the sitcom — rather shy. And even though Blanche Devereaux was written as a sex-crazed ditz, Ms. McClanahan gave the character some depth that peeked through. I don’t think it could have been played as well by someone who didn’t understand that there’s more to a character than just the stereotype.

Thank you for being a friend.