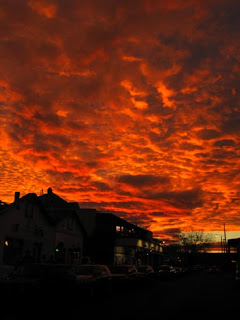 Nine years ago today I loaded up the Pontiac with my plants, my computer, and Sam. At 6:30 p.m., in a driving rainstorm, we left Albuquerque following the Bekins moving van on our way to Miami and my new job. We drove until midnight, getting to Pecos, Texas, where we spent the night. The next morning we got on I-10 and cruised across the Lone Star state, catching Houston at rush hour, New Orleans in the dark (I took the detour through the city so I could say I’d been there), and finally stopped for the night somewhere on the Mississippi/Alabama border. Finally, forty-eight hours to the minute after leaving Albuquerque, we arrived in Miami… in a rainstorm.

Nine years later, I still have the Pontiac and the plants. Sam is gone, and the computer — a Gateway PC — has been replaced three-fold. I don’t have the same job I did when I came to Miami, and I’m living in my third residence. I have made a lot of new friends, renewed some old ones, and maintained contact with the people I left behind in Albuquerque who still mean as much to me now as they did then.

Nine years is the longest I’ve lived in one city since I graduated from high school. My current job is the longest I’ve worked in one place at basically the same job; it will be eight years in October. For someone who is staring down the barrel of his 58th birthday in six weeks, that probably makes me sound like a flake; I know people who are my age who have worked at the same place since they graduated from college and I’m being invited to their retirement party hosted by their grandchildren. But I wouldn’t trade my life experiences for anything. Yeah, there are some things I could have done better, and I have a few regrets, including my failed relationship with AJP. But even there, we had fifteen good years and wonderful memories — and a lot of growing up for both of us — that can’t be discarded because we’re apart. Although I’m not doing exactly what I planned to do with all those years of studying theatre, I am very proud of the work I do, and I feel like I’m making a genuine contribution to the education of the 340,000 students of Miami-Dade County Public Schools. I owe a lot of that to the experience I gained working in Albuquerque and Michigan. As for the theatre, moving to Miami gave me the inspiration to write the play that gave me my first New York production in 2008. So all in all, life is in balance.

In a way, it’s hard to believe it’s been nearly a decade that I’ve been back in Miami. In a lot of ways I still feel like a newcomer. I still have a strong connection with New Mexico, including being the defender of New Mexico Spanglish among a lot of other different accents and dialects. I still miss the glory of the mountains and the spectacular New Mexico sunsets, and I still have yet to find a place in South Florida that does huevos rancheros the right way. But I’m glad to be here and able to look back at all the amazing blessings that have come my way.