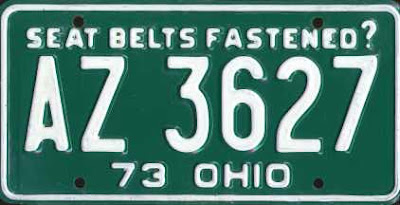 I’ll never forget the look on my roommate’s face when I opened the package with my new license plates in the spring of 1973. But he was from New Jersey and their plates were beige and said “Garden State” on them, so his surprise was genuine.

Ohio plates hadn’t had a slogan since the 1930’s, and according to at least one expert, it’s the one and only time a slogan ended with a question mark. It was the brainchild of the administration of Gov. John J. Gilligan, a Democrat elected in 1970. (Full disclosure: I worked on his campaign and hung out with his kids at their summer place in Michigan. Also, he’s the father of former Kansas governor and now Secretary of HHS Kathleen Sebelius.) I suppose Mr. Gilligan’s Irish heritage had something to do with the choice of colors; it could be described as Emerald Isle green.

The Mustang had this style of plate for a short time. In August of 1973, in a fit of idiocy that I’ve regretted ever since, I sold it for $300 to buy a new Ford F-100 pick-up. I paid $2,778 for it off the lot at Donaldson Ford in Maumee, Ohio. It was blue over white, had a three-on-the-tree manual transmission, and a radio. Pick-ups didn’t get plates with slogans; they said TRUCK across the top, and you paid for the plate based on the weight, which was determined by taking the truck to a local grain elevator and paying a couple of bucks to have it sit on the truck scale and get the certificate of tare weight for the deputy registrar.

Since Gov. Gilligan was a Democrat and the deputy registrar was a patronage job, the license plate shop was now wedged into the tiny showroom of Lober TV on Louisiana Avenue in the business district of Perrysburg. Mr. Lober may have been a Democrat, but I remember him as a remarkably dour and humorless man who saw the license plate franchise as an intrusion into not just his business but his solitude. I’m pretty sure that Mr. Lober was not entirely disappointed when Gov. Gilligan lost his bid for re-election in 1974 to former Gov. James Rhodes, a Republican, and the license plates moved back across the street to Norm’s Appliance.