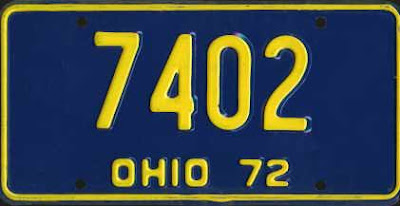 The University of Toledo celebrated its centennial in 1972, so the state honored it by using the school colors on the license plate that year.

TU, as it was known when I lived there, didn’t get a lot of respect from my friends when I was growing up; it was known derisively as “Bancroft High” for the name of the street where it’s located. But it really is a quality institution of higher learning with a widely-respected law school and courses in technology, and my mom is a proud alum, finishing her bachelor’s degree after a brief interruption to get married, raise four kids, and become a major contributor to her community before going back to school.

I also took a class at TU when I was in high school. When I went off to SG in 1967, I switched from French to Spanish. When I returned to my old school a year later, they did not offer Spanish as a foreign language. The school made arrangements for me to spend three hours a week being tutored in Spanish II with a kindly professor whose name is lost in the mists of time.

The Mustang wore this plate in the spring of my freshman year at Miami, so it wore it around the streets of Coral Gables and Coconut Grove.

I agree with David Nicholson; this is a very nice combination of colors.