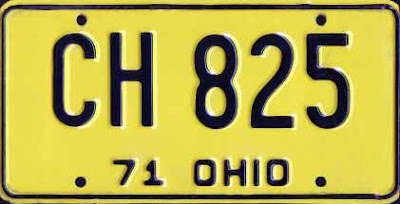 I don’t know if the bright yellow and black colors were meant to honor any college or university in 1971, but I can say that the combination was very popular in my home town where the high school sports teams were the Yellow Jackets and those were the school colors.

I graduated from high school in 1971. I also got full use of the Mustang; my older sister and brother had each acquired their own cars. The lowest series of plates with five numbers in a row were 13xx N, so that’s what we got, and although we kids took off and moved to other states, my parents kept their numbers until they moved to Michigan in 1982.

In October of 1971, after getting a student parking permit at the University of Miami, I drove the Mustang to Miami. Since the car was in my father’s name, I didn’t get a Florida plate for the car, but at UM it wasn’t unusual to see cars with plates from all over the country.