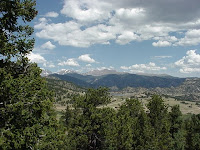 I loved the years I lived in Colorado. I still have a lot of friends and family there, too, and I have a lot of good memories of good times. The politics of the state has always been a mix of progressive liberalism, hard-core right-wing Jesus-freaky conservatism, Old West libertarianism, and a touch of wackiness that might come from the combination of altitude and open space. After all, this is the state that gave us Gary Hart, an unashamed liberal; Ben Nighthorse Campbell, a Democrat-turned-Republican Native American U.S. senator; and Amendment 2, and the the anti-anti-gay discrimination law that was so odious that the Supreme Court under William Rehnquist threw it out. So that mix might explain the political circus going on out there now.

Former Congressman Tom Tancredo is in the race for Colorado governor, he said this morning.

“I will officially announce at noon that I will seek the nomination of the constitution party,” Tancredo told The Denver Post.

The Littleton Republican must file some papers with the Colorado Secretary of State and register as a member of the American Constitution Party, but then “he’s ready to go,” raising money, disclosing his platform and launching a website that is already put together.

Tancredo gave Republican candidates Scott McInnis and Dan Maes an ultimatum last week: Promise to get out of the race after the primary if polls showed the winner lagging behind Democrat John Hickenlooper or else he would get in as a third-party candidate.

Both Maes and McInnis refused.

Tancredo’s entry into the race is likely to split the GOP vote in the general election, giving Hickenlooper a win, said Dick Wadhams, head of the state’s Republican Party.

Mr. Wadhams and Mr. Tancredo got into a shouting match on talk radio, too, just to give the race a little spice. Mr. Tancredo, as you’ll recall, has a long history of making racially-tinged remarks about immigrants, the president, and just about anybody in general that doesn’t fit in with his idea of the Aryan Master Race average white Coloradan. There is a strong conservative element in Colorado, including some vestiges of the Old West that doesn’t cotton to strangers, but even they might find Mr. Tancredo to be a little too much.

And then there’s Ken Buck, the Weld County DA who’s running for the Senate and in a primary race with Jane Norton. Last week he got a little weird — not to mention a tad misogynistic — when he told an audience that voters should back him because he was the candidate who wasn’t wearing high heels. Now he’s been caught on tape referring to birthers as “dumbasses.”

On an audio tape obtained by The Denver Post, Buck was caught muttering “will you tell those dumba—s at the Tea Party to stop asking questions about birth certificates while I’m on the camera?” outside a June 11 event in Crowley.

Buck then started laughing as he walked into the event with the Democratic tracker.

“What am I supposed to do?” he asked, rhetorically.

Well, for one thing, you might want to reconsider calling yourself the Tea Party candidate before they come after you, rhetorically or otherwise.