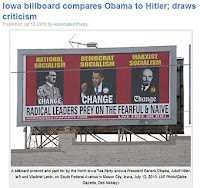 The North Iowa Tea Party has put up a billboard in Mason City, Iowa, comparing Hitler, Lenin and President Obama, reports the Associated Press. The bottom of the sign reads: “RADICAL LEADERS PREY ON THE FEARFUL & NAIVE,” while the words “National Socialism” appear above Hitler, “Marxist Socialism” above Lenin and “Democrat Socialism” above Obama. The word “change” is stamped on each picture.

A spokesperson for the Tea Party Patriots told the AP the sign isn’t appropriate. Meanwhile, North Iowa Tea Party co-founder Bob Johnson says the sign’s pictures may be getting in the way of its intended message — presumably a level-headed and civil comparison of Obama to Hitler and Lenin.

I love the the line about “RADICAL LEADERS PREY ON THE FEARFUL & NAIVE.” It’s like they know themselves pretty well.