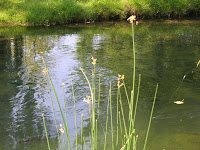 Dad and I went down to his little fishing club near Fremont today. It’s an old club with a well-established creek system that snakes through the property, so basically all you have to do is step out onto the shady banks and cast your line in.

Fly fishing is a delicate skill that requires a lot of experience to get it right. I have tried on several occasions to master it, but I lack both the fine motor skills and the depth perception to get it right. The most I’ve ever caught with a fly rod is a tree, my leg, and my dad’s hat. So this time I went along as the creel-bearer and the photographer.

My father’s fishing rod is a work of art; a split bamboo pole with delicate features but the flexibility and strength far beyond its appearance. My father also has many years of fishing, first as a boy with his father, then in places like Colorado, Idaho, and Michigan where it is more than just a sport but a ritual of art and strategy. Casting the line just so the fly lands exactly where you want it requires the touch and skill of a conductor coaxing the music from an orchestra, and even tying the fly on the leader requires a jeweler’s touch, not to mention the magnifying glass. 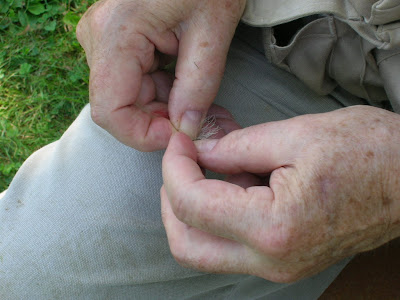 My father is color-blind and I have no depth perception; plus, I am nearsighted even with reading glasses. The leader we were using was the thickness of spider-web. Much hilarity ensued, but we did eventually get the fly tied on and went out to the stream. 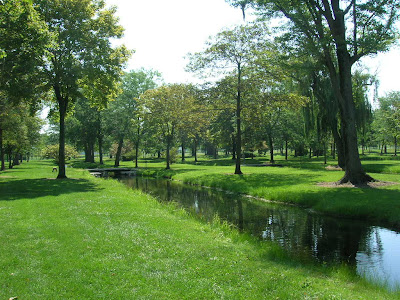 On the second or third cast, a good-sized trout struck the line, and me being the assistant, promptly stepped in with the net and we landed it. Within moments it was in the creel, the fly cleaned, and back to the water went the mighty fisherman. 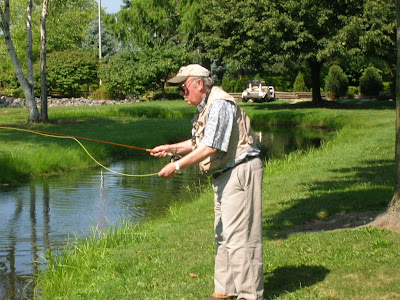 An hour or so went by without any further interest evinced by the fish in our lure. Even appeals to the Fishing Gods didn’t work. 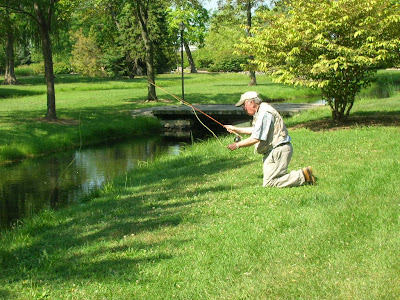 My theory is that word spread quickly among the piscean population: “Hey, Fred got snagged by the little yellow bug! Stay away!” So we changed the lure to a black ant and a thicker leader. This one was a rope compared to the first one, and we were able to get it tied on with only one of us embedding the hook in our thumb. True to form, on the second cast, we had another good-sized trout, and the creel was now carrying two home from the quest.

And that was it. More casting, more disinterested fish, so after three hours on the banks of the stream, we had a very pleasant lunch and conversation with some fellow fisherman and came home. And tonight we will dine on the catch. 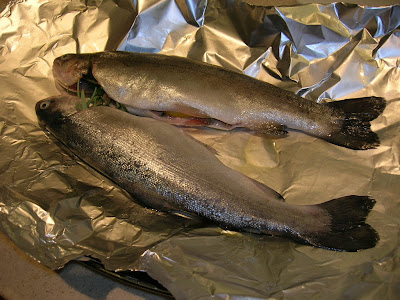 I’ll let you in on a little secret. I’m not much of a fisherman, but I don’t go for the fishing. I go to be with my dad and doing something that he loves.