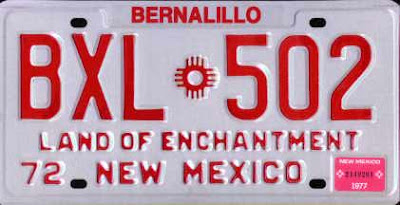 August 1977. Once again I was done with college and didn’t have any real plan for my future. I had spent the nine months or so looking for a teaching job in private schools, but after a couple of interviews and visits to schools everywhere from New Jersey to Texas, I had nothing. So after another summer at camp in Colorado, I came back to Ohio and dumped my stuff in the attic.

But that summer the seed of an idea had been planted. My uncle and his family were moving to Santa Fe for a year; he was on sabbatical from his teaching job at an Ivy League college, and the house they were renting had a little guest house. In October I loaded up my car, strapped my skis on the back (I heard there was a ski hill in Santa Fe), and headed back west, this time taking I-70 across Missouri and Kansas, arriving first in Colorado Springs where I stayed with a camp friend for a couple of days, then headed south on I-25.

I have never forgotten the first time I came down Raton Pass crossing from Colorado to New Mexico. It was like going from one world — the heavily-timbered mountainsides that I was so used to in the Rockies — to another — the rich browns and wide expanse of the desert Southwest. As I drove across the wide plains and past the small towns, I knew I was in a place that was not just different from what I’d grown up in, but a land that was not much different than what it looked like for thousands of years. Other than the ribbon of highway and the occasional sign, the hand of man seemed insignificant indeed.

I arrived in Santa Fe at dusk. The evening was cool, the scent of pinon and juniper everywhere, and the sunset was spectacular. The house was in the foothills south of town, out on Old Santa Fe Trail, and the next morning, I knew I was in a place that could be my home.

After a couple of weeks I made it official: I registered my car in New Mexico, getting a plate that declared I was in the LAND OF ENCHANTMENT. I found a house to share with a couple of other guys who were working at Ski Santa Fe, and a couple of weeks later I landed a job as a volunteer teacher at a little private school started and run by an energetic bear of a man who had been a teacher in one of Santa Fe’s better private schools. After Christmas and my cash situation became severe, I got a job working as a chairlift operator at the ski hill. It meant getting up at five a.m. to be up the mountain in time to open at nine, but one of the perks was free skiing, and I did a lot of it.

One day my younger brother arrived, towing his Kawaski KZ 1000, and after a couple of days sleeping on the couch, he and I rented a little place on a month-to-month basis in a nice little neighborhood. He got a job with me at the ski basin (in the rental shop), and when he wasn’t working he was riding his bike all over the hills of Santa Fe.

When the ski season ended, so did my job. My brother went back to Ohio and I got a job doing custodial work for a car repair shop. In June I stashed my stuff in a friend’s garage and headed back to Colorado. At that time I didn’t plan on coming back to New Mexico — jobs were tough to find and I couldn’t live on what I had saved up until the ski season arrived — so after picking up my stuff in Santa Fe, I headed back east across the desert, watching the land turn slowly from brown to red to green. But I had a feeling that someday I would come back.