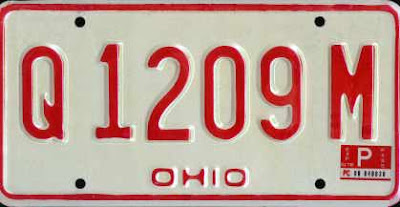 Unlike a lot of other states — Michigan, Wyoming, and Pennsylvania to name just a few — Ohio did not do a Bicentennial license plate in 1976. In fact, it was as plain as you could get without going to black and white. But there were a couple of things about this one that were special. First, the color of the numbers matched my car, and it was also my first personalized plate. For an extra few bucks, I had QUAKER on my plates. Of course, later on I realized that it was a rather un-Quaker thing to advertise my faith — not to mention the oatmeal jokes — so when I moved to New Mexico for a while in 1977, I was not sorry to give them up.

The other memory I carry with this plate was that 1976 was my first summer working at the summer camp in Colorado that to this day still resonates in my life. I came back from Minneapolis in late May to participate in my sister’s wedding in Perrysburg, then a few days later I drove across country to Estes Park, Colorado, returning to the camp where I had been a camper in 1964 at the age of 11. Back then, my brother and I had taken the train — the Burlington Zephyr — overnight from Chicago to Denver. Then we rode on a bus up into the mountains, through the canyons and up to the sky, it seemed. I was frightened — I’d never been away from home before — and my brother was older and in a different camp than I. At first I was homesick, but a counselor took me aside and taught me how to pitch horseshoes, and my homesickness vanished.

So there I was, twelve years later, all grown up and ready to be a counselor. It was an eventful summer to say the least, ending with the Big Thompson Canyon flood. Despite the chaos and tragedy, we all made it through, and that summer was the first of ten that I would spend in the Rockies, making friends that I still have and keep in touch with today.