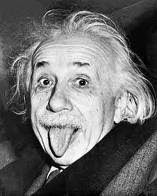 The same people who believe the world was created in six days just 6,000 years ago and that evolution is eviloution now think that Einstein’s theory of relativity is a liberal plot to get science students to stop reading the Bible.

If you’re behind on your physics, the Theory of Relativity was Albert Einstein’s formulation in the early 20th century that gave rise to the famous theorum that E=mc2, otherwise stated as energy is equal to mass times the square of the speed of light. Why does Andy Schlafly hate the theory of relativity? We’re pretty sure it’s because he’s decided it doesn’t square with the Bible.

“Virtually no one who is taught and believes relativity continues to read the Bible, a book that outsells New York Times bestsellers by a hundred-fold.”

He doesn’t offer any proof of his anecdote, but then again, if we doubt him, we’re just a bunch of liberal non-believers.

The proof that the theory of relativity is bunk is in the Bible, of course; John 4:46-54 wherein Jesus performs a miracle via long-distance, proving that he can travel faster than light.

Next up: Gravity is only a liberal theory; it’s really intelligent falling.