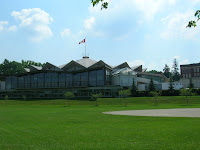 We’re here, ensconced at the Festival Inn, and although I missed a few years in the 1980’s and 1990’s, this marks my fortieth year since I first came to Stratford, Ontario, to see the Stratford Shakespeare Festival.

That first visit was in 1970. I was working at a farm in Plainfield, Vermont, so my mom made arrangements for me to fly from Montreal to London (Ontario) where they picked me up. We saw three plays — The School For Scandal, The Merchant of Venice, and Hedda Gabler. I was mesmerized. I had always enjoyed theatre as a kid, being ever the showman (or attention-getter), but this was an epiphany, and I knew then that it was what I wanted to do in some way or another. A month or so later, it just so happened that I was asked to audition for a small part in a play at the Cherry County Playhouse in Traverse City, Michigan. I played Vivian Vance’s horny teenage son Jimmy in My Daughter, Your Son, and that basically sealed the deal.

Our family has made Stratford as much a part of our life as any family tradition. While it’s been years since my other siblings have been here, I can still remember the nights at the Golden Bamboo, the picnics on Tom Patterson Island, and the hush that fell over the audience as the fanfare blew and the deep gong reverberated.

And here we are again. Let the revels commence!

(Note: the motel pictured at the end of the video is not the Festival Inn.)
My reviews of the plays we see will be posted on Bobby Cramer.