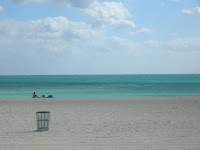 It occurred to me this morning that this month is the one where we get the nutsery in full bloom. Maybe it’s the heat in some places; maybe it’s because people with kids are tired of chasing them around while they’re on summer break and have just had it and can’t wait for school to start (on Monday here in Miami); maybe it’s Congress being in recess and they’re back home stirring up mischief instead of being locked in the asylum on the Potomac. Who knows. But a lot of crazy stuff happens in August. And I see I’m not the only one who is wondering this.

It has traditionally become the month to celebrate how stupid America has become. It is the month when stupidity in America goes on full display with a vengence [sic].

It’s not just us and not just now; the Russians invaded Czechoslovakia in August 1968 at the same time riots were breaking out in Chicago outside the Democratic National Convention. The Watts riots broke out in Los Angeles in August 1965. And, of course, World War I started in August 1914.

Maybe in one respect the French have the right idea. They basically take the entire month off. Paris is a ghost town in August while everyone heads for the beach. Maybe we should all just do that.