I’m starting a new occasional series of posts about people I’ve gotten to know, and with their permission, I’m going to tell you a little bit about them.

It may be Labor Day, but chances are that one of my friends is working today. Not because he has to, but because he wants to. 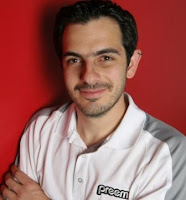 I first met Ivan Mladenovic when he was a senior in high school and I was teaching. He was one of the guys who hung out in the film and video classroom, always energetic, and although I didn’t have him in any of my classes, his drive and enthusiasm was more than just typical teenage energy; he was on to something. That was nine years ago. We reunited last fall at a local blogger meet-up and the next thing I knew, there he was on my Facebook page, still as energetic and upbeat about both his future and the possibilities it held as he was when he was 18. We’ve kept in touch since our first reunion. Of course, he being the up-to-date media guy and me being the one with an eight-track player in the kitchen, it was via Facebook. (Twitter? What’s that?) Last week, just to catch up, we had dinner and talked about what we’ve been doing. He’d had quite a ride: a degree from the University of Miami, a year in Los Angeles working in the film industry, and then back to Florida where he’s started a start-up computer repair business called Preemo, based in South Miami. And if I know Ivan, he’s out there today doing sales and fixing computers while the rest of us are either enjoying a day off or wishing we were. He does it because he likes it.

He enjoys the contact with the people, he has a style that is natural and completely transparent, and while I have yet — whew — to need him on an urgent basis for my computer repairs, I have the confidence that he knows what he’s doing and won’t try to sell me something I don’t need. In that business — where the customer rarely has any idea what it takes to fix something as mysterious and complicated as a PC or a laptop — the opportunity for either upselling or overselling a worthless service for an exorbitant amount of money is very tempting and very prevalent (I’m looking at you, Geek Squad…)

Before I got into my present line of work, I had my own experiences as a salesman, and I’ve seen all types and had to work with everyone from the hard-core “what would it take to get you to buy my stuff” to the glad-handing sleazeballs with the polyester suits and toupees to match. I’ve also worked with a number of people in sales who instantly earned my trust because they didn’t try to bullshit me. They actually educated me, and even if I didn’t end up buying their particular product, they had done me a service. (I inevitably did buy from them, and was happier for doing it.) It’s getting harder to find people like that, especially in an economic climate where businesses are frantic to close out the month with numbers that aren’t scary. It’s also hard to find someone who will honestly tell you that they love their job not because of the money but because of what they’re doing for the people who come to them.

In that way I find a connection with Ivan; he sees beyond the bottom line and is doing something that is helping his customers succeed in their own business, whether it’s a law firm’s mainframe, his girlfriend’s photography business, or some blogger in Miami with a funky “A” record (whatever that is).