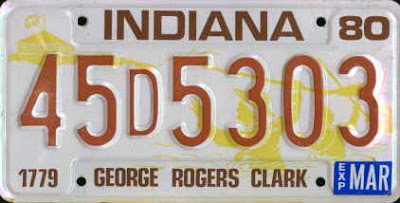 Of all the places I thought I would live and start a career, southern Indiana never showed up on the radar until I was suddenly offered a job to teach middle school English at a private day school in Evansville. Honestly, until I got the call from the headmaster who had tracked me down while I was being interviewed at a school in the Chicago area, I barely knew Evansville existed. But the school needed a teacher, I needed a job, and after I concluded my interview, I drove the Jeep out to O’Hare and flew down there.

Twenty-four hours later I was back at O’Hare with the job in hand, and two weeks later, the Jeep crammed to the roof with books, clothes, records, my stereo, and no idea where I would live, I rolled into town on a hot and humid afternoon in late August 1979. I vaguely remember staying at a motel near the airport that night — the room had an air conditioner that rivaled the jet noise — and the next day I found a furnished one-bedroom apartment in a nice area (Washington & Vann for you E’ville denizens) for $175 a month. That was pretty good, but seeing that my salary was $10,000 — I got an extra grand because I had a masters degree — it was about all I could afford.

I’m not sure why some people think that because I have degrees in theatre and playwriting, I can teach English. I must have thought it, too. But I soon learned that there is more to English than just interpretation of fiction, writing, or the mechanics and rules of grammar, spelling, and punctuation. I’ll be the first to admit my shortcomings in a discipline that is in some ways very connected to my chosen field of study, but also very distant. And I also learned that teaching in a classroom is vastly different than being a camp counselor. To be brutally honest, I was not a good teacher that first year; I had a lot to learn and the stubbornness to refuse to learn. But the one blessing was that I had a good friend as a mentor, and he and his wife became life-long friends.

The one thing I did learn to love about that part of the country was taking the Jeep (with the color-coordinated Indiana license plate) and exploring along the Ohio River as it meandered along the state’s southern border. I spent time in some of the most beautiful countryside I’ve ever seen on both the Indiana and Kentucky sides, going east to Owensboro and Louisville and west to New Harmony and the Land Between the Lakes, the recreation area created by the TVA dams.

When the school year ended, I decided I needed to explore other options. I needed to learn more about teaching — and myself. I had signed the contract for another year but told them it would be my last, and in June, when I loaded up the Jeep to head to Colorado and camp again, I thought I’d spend some time in Boulder. Hey, if it was good enough for Mork and Mindy, it was good enough for me.