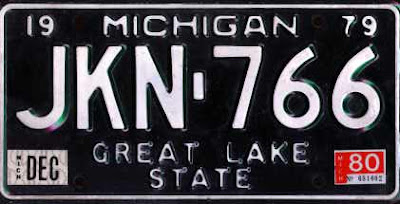 Winters in northwestern lower Michigan are not for the faint of heart; they get a lot of snow there thanks to the lake effect. By December my 4×4 Jeep Wagoneer was coming in very handy, and we recorded measurable snowfall every day between Christmas and Valentine’s Day. Getting to the radio station first thing every morning to do the morning news often meant being the first person to drive on a snow-covered road. But the roads were well-marked — beanpoles every hundred yards or so marked the edge of the road, so I was not inadvertently taking off-road trips on the way to work.

By spring, however, it was pretty clear that the station was losing money. Aside from a small-town base to find advertisers, the economy of 1979 was still lagging. And there wasn’t that much local news to cover; not that much happens in a small rural county. (My one big story was that in April I was invited to Washington to participate in an out-of-town news editors conference at the White House. I sat in the Cabinet Room, asked President Carter a question about ethanol, and got to interview Alfred Kahn, the White House inflation czar.) I made some friends and through one of them was asked to help with a high school production of The Music Man, and I was also included in the local Episcopal church even though the priest knew that I was a Quaker. But by June the fire had gone out of my interest in covering the news — not helped by having to cover a traffic accident that killed two acquaintances — and I started looking for a teaching job. The radio station laid me off when they couldn’t pay me any more, and once again I moved back to my parents’ place in Ohio.

I spent that July looking at schools in New England, staying with friends and relatives in Boston (and was there for the Arthur Fiedler memorial concert on the Esplanade) and New York. I came up dry, and by August was down to my last couple of school interviews. I happened to be in Chicago when a call came through from a private school in southern Indiana. An overnight trip and an interview was arranged, and out of the blue I had the job teaching middle-school English. By Labor Day I was settled into a little furnished apartment, finally doing what I thought was my life’s work.