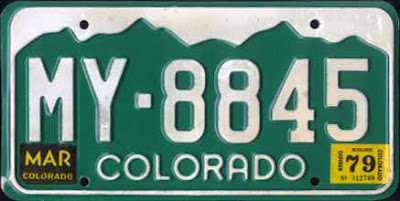 When I arrived at camp in June 1981, my Indiana plate was about to expire, so the only choice I had was to register the Jeep in Colorado. I didn’t mind at all; I’ve always admired the Colorado plates with their mountains and simple layout. I was also moving to California after camp and I knew that registration in California meant that the car had to live up to the emissions standards out there. The previous owner of the Jeep had basically stripped the pollution controls from it, and I had spent some money getting them back to normal, but I knew it would never make it, and when I got there in August, a mechanic took one look under the hood, laughed, and said to hang on to the Colorado plates.

As it turned out, my stay in California was brief. The school was on its last legs when I got there and by February I was accepted at the University of Colorado’s grad school to begin my doctoral studies in August. And the Colorado plates stayed on the Jeep. In fact, the plates served three cars. After pouring tons of money into keeping the Jeep running, I traded it for a 1984 Subaru wagon — a woefully underpowered car that developed a major engine problem at 64,000 miles — and then on the 1988 Pontiac station wagon that I bought in January 1989 and is still in my garage today. So far, the Colorado plate was the longest-tenured, from 1981 to 1990.

There is deep, ancient, and primeval magic in the mountains. Gazing down into the forested canyons of the Front Range from the heights of Trailridge Road in Rocky Mountain National Park, it is not hard to believe there are places there where no human has yet set foot. Standing on top of Longs Peak after a six-hour hike beginning in the pre-dawn darkness among the ponderosa pines and rising above tree-line as the sun climbed over the distant prairie was the journey of a lifetime and the memories are still there thirty years later. I loved the years I lived in Colorado; the summers I spent in the mountains were some of the best times of my life, and I met someone with whom I fell deeply in love and shared my life with for fifteen years. Were it not for my growing intolerance for cold weather, I would probably still be there, and I hope that when I am retired, I will be able to go back and spend the summers in the peaks and pines.