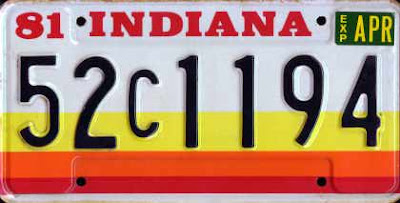 This is one of the more colorful plates in my collection, and I remember thinking that it looked good on the Jeep.

My second year in Evansville was my last. I got an offer to teach at a school in California, so when the school year ended, I packed up my stuff, sent the larger pieces on ahead via United Van Lines, and drove out to Colorado for another summer at camp.

One of the things I love about this country is driving across it. Most of the trips I’ve taken, be it from Ohio to Colorado or to New England or down to Florida, have been on the interstates. By design most of them avoid the cities and towns, cutting across great parts of the rural parts of the country, never stopping to take a look at the surroundings. There’s a danger, as John Steinbeck noted in 1960 in Travels With Charley, that you can drive from coast to coast without seeing a thing. Steinbeck, in his cross-country journey “in search of America” in his GMC camper named Rocinante, made a point of staying off the new highways and followed the backroads from Maine to California and back again.

I try to take the time to look around when I’m traveling. Sometimes I’m determined to get where I’m going, but most of the time I’m aware of the landscape, noticing the gradual change from the farms of the Midwest to the Badlands of western Nebraska; the gentle rise and fall of the ancient Appalachians as compared to the sharp and rock-strewn sides of the Rockies, and the wide moonscape of southern Utah heading down to the deserts of Nevada and southern California. Stopping along the way at the little gas stations and attractions is fun, and since the Jeep got about 14 mpg, I did it a lot. I especially loved following the faint path of the old roads like Route 66 that run parallel to the newer interstate in New Mexico and Arizona. Some of the old abandoned gas stations and motels are still there, overgrown with tumbleweeds and serving as reminders of a slower time when you bought gas from Esso and Humble and got a pecan log at Stuckey’s.

Some of the places have been restored and now serve a new purpose; a Howard Johnson’s restaurant is now the roadside Church of Christ. Some of the old motels are still in business, catering to the nostalgic and offering a night in the 1950’s-style rooms with turquoise decor, diner food, and the HBO converter box hidden in the space-age TV console.

I’ve spent the night in some of these places on my cross-country travels. And when I get up early to hit the road, crossing the gravel parking lot to get a cup of coffee and pancakes at the diner, I sometimes think I see Rocinante just passing by, its tail-lights fading into the morning light.