The Tigers ended the season right where they started: with as many wins as losses. 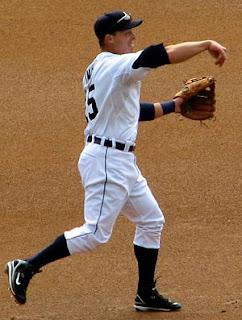 Johnny Damon’s final hit as a Tiger was a go-ahead single in the sixth inning, ending Detroit’s six-game losing streak with a 4-2 win over the Orioles on Sunday afternoon at Camden Yards.

The win closes out the Tigers season with an 81-81 record, their fourth mark of .500 or better in five seasons under manager Jim Leyland.

The Tigers seemed headed for a losing season, after Phil Coke gave up two runs on five hits over 1 2/3 innings in his first Major League start. But 7 1/3 innings of scoreless relief allowed the Tigers to use two key hits from two soon-to-be free agents to fuel a comeback.

On the same day the Tigers confirmed a contract offer to Brandon Inge [pictured], his two-run homer tied the game in the fifth off O’s starter Brad Bergesen. Inge’s 13th home run of the year scored Jhonny Peralta, whose single two batters earlier was Detroit’s first base hit of the afternoon.

Will Rhymes’ one-out double in the next inning set up Damon, who hit a bouncer through the middle that allowed Rhymes to score easily. Ryan Raburn tacked on an insurance run by scoring on a Brandon Snyder error in the ninth.

Daniel Schlereth (2-0), who could be in line to become a key lefty reliever in the Tigers bullpen with Coke moving to the rotation, earned the win with 3 1/3 scoreless innings and four strikeouts. Jose Valverde finished off Detroit’s season with his 26th save.

They started out strong all the way up to the All-Star break in July, and then the wheels came off. When their pitching was strong, the bats were weak, and when the offense was good… well, you get the picture. And then there were all the injuries to their best players. Granted, it’s hard to be a game-by-game critic when the most you have to go by is the 1980’s video-game-style “Gameday” play-by-play, but when I was lucky enough to catch them on TV, the spirit was there.

Thanks for another good year, boys, and we’ll see you again soon; it’s not that long to February. And good luck, Johnny Damon, wherever you end up.