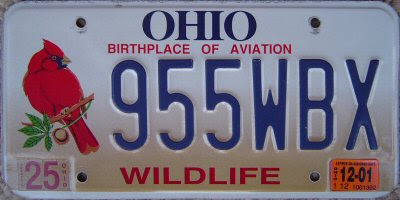 The story goes that in the spring of 1998 my Mom and Dad were up in Michigan visiting friends and they stopped by to visit an old friend who owned a used car lot. Ernie had sold them a lot of cars for my dad’s company’s sales fleet when he ran the Hertz Sales operation in Traverse City; in fact, that’s who sold me the Pontiac in 1989. On the lot was a beautiful 1995 Mustang GT convertible in Laser Red and my mom instantly fell in love with it. She traded in her 1979 Volvo and took it back to Ohio. The anecdote is that the Mustang was once used as the parade car for the Queen of the National Cherry Festival.

June 1998 also marked my parents’ 50th anniversary, so when I came to Perrysburg for the celebration, I got to drive the Mustang, and to quote Will Smith in Independence Day, “I gotta get me one of these!” But I lived in New Mexico, I still had the Pontiac, and a new Mustang was out of my reach financially, so I told Mom that whenever she got tired of the it, I wanted to be the first she’d offer it to.

Five years later and after I’d moved to Florida, Mom saw the new MINI. Even though there wasn’t a dealer in Toledo, she found the perfect one at a dealership in Columbus, and that August we made the deal. I flew up for our annual trip to Stratford and drove back to Miami in my second Mustang. (Planning ahead, I bought two CD’s: The Sounds of Summer by the Beach Boys and Dave Brubeck’s Time Out. The first was the perfect collection for the car, and the second was a tradition.) When I arrived in Miami, I parked the Mustang next to the Pontiac in the parking lot of my apartment complex.

Because of the draconian registration rules in Florida, I kept the title in my mom’s name until I could scrape together the $500 to pay for the taxes and the plates, so I kept the specialty plate that Mom had. I also did it out of my love for birdwatching, a hobby I had cultivated as kid with my parents; I still have my well-worn and dog-chewed 1962 edition of Roger Tory Peterson’s Field Guide to the Birds. When my parents first came to visit me after I had moved to Miami at Christmas in 2001, we spent a happy couple of days exploring the ornithology of the Everglades from our base in Flamingo.

By March 2004 I found a new place to live. It was a nice little bungalow in Coral Gables and it had a one-car garage for the Pontiac. It was retired… or so I thought.