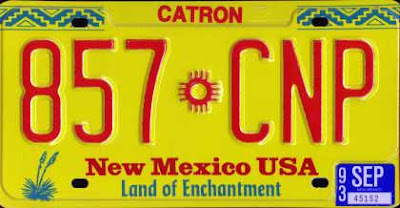 By the summer of 1995, I was beginning to dread going through another Michigan winter. My father had sold his business to someone who turned out to have the business ethics of an alligator, and I no longer wanted to work there. Through a happy coincidence, though, I was in contact with another window and door company in Albuquerque — they had handled the delivery of windows to my uncle’s new house in Santa Fe — and after a quick trip back out to New Mexico, I was offered a job as purchasing manager. Allen and Sam and I packed up again, leaving Petoskey in the middle of a mid-October sleet storm. After a brief stop-off to visit Allen’s family in Colorado, we arrived in Albuquerque on a sunny Friday afternoon. We spent a day with a realtor, found a perfect place to rent — which we later bought — and Allen landed a job as the head of the housekeeping department at a four-star hotel in Santa Fe. Our lives and future looked as sunny as the New Mexico license plates.

Speaking of which, I still had my old New Mexico plate in my collection, and I thought it would be fun to see if I could still use it, even though it had expired seventeen years before. The Bureau of Motor Vehicles said the only way I could get the old number back was to request a vanity plate for an extra $10 a year. So that’s what I did, and in a few weeks I had a fresh new plate with my old number on it.

One of the quirks of living in New Mexico is that not everyone knows that it’s a state. There are a lot of stories, as chronicled in New Mexico magazine’s regular column “One of Our 50 is Missing,” about how people who live in other places think New Mexico is a foreign country. Perhaps that’s why the state put “USA” on the license plates. It may be a droll commentary on the lack of geography education in our schools, but in some ways I can see why. There is something enchanting and different about New Mexico. Maybe it’s the dry air and the nearly-perpetual sunshine, or the combination of mountains and desert, or the amazing food, or the blending of cultures that give it a sense of timelessness. When we found the time, Allen and Sam and I would explore, going up into the hills between Santa Fe and Albuquerque or the hot springs up near Jemez, or learning about native cultures at places like Bandelier and Pecos under the gentle guidance of my uncle, a retired anthropologist. We went skiing at Taos and Santa Fe (bringing back memories of sitting in a chairlift shack on top of Santa Fe Baldy in 1978), or finding the best place to get a really magnificent chile relleno. Yes, I love Florida, but there is something in me that still seeks the mountains and pines, and I have already decided, upon my retirement, to spend at least my summers among the junipers and pinons with a pot of posole simmering on the stove.