Today is a milestone in American automotive history. At midnight, the Pontiac brand will officially cease to exist.

The G.M. brand that was advertised for “driving excitement,” Pontiac brought Americans the Bonneville, GTO, Firebird and other venerable nameplates. Sportier than a Chevrolet but less uppity than an Oldsmobile or Buick, the best Pontiacs, recognizable by their split grille and red arrowhead emblem in the middle, were stylish yet affordable cars with big, macho engines.

Its biggest triumph was the GTO, developed by Mr. DeLorean, the brand’s rebellious chief engineer, in violation of a G.M. policy dictating the maximum size of a car’s engine. The GTO was a hit, and the age of the muscle car had begun.

Before Pontiac grew its bulging muscles, though, it had a reputation as a rather dowdy car; one that your grandparents — including mine — kept in the garage and drove to work or church. It wasn’t until Bunky Knudsen gave it the “wide-track” ride, the GTO option, and the Firebird in the 1960’s that it became the car of surf songs and Smokey and the Bandit movies. It was the car that put power in the sedan with the big engines and named a model, the Bonneville, after the track where land-speed records were set. 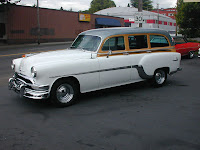 I remember Pontiac, though, as the first car I remember our family owning: a 1954 station wagon, light green with dark green trim, a three-speed column shift, and a big round radio speaker that I tried to steer like a steering wheel. And I think that’s when I fell in love with cars. My parents can tell you, much to their chagrin, that I was able to name the brands of cars long before I could master the multiplication tables. And though we switched to Fords when the green wagon was traded in, I harbored a secret desire to have a Pontiac station wagon again. Even after my love for the Mustang went from crush to reality, I still felt drawn to the brand that reminded me of the well-dressed and well-built teenager who was polite to the grown-ups at the country club at the cotillion but also liked to smoke behind the tennis court and drag-race down Louisiana Avenue when the cops weren’t looking. 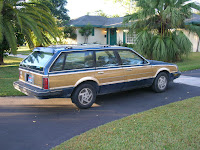 So when the chance came in 1988 to get a nearly-brand new Pontiac 6000 Safari wagon with all the trimmings and the big V-6 fuel-injected engine, I bought it sight unseen from Hertz Car Sales in Traverse City, Michigan. I decided to keep it as long as it lasted. That was nearly twenty-two years and over 250,000 miles ago, and it’s still in the garage, keeping company with my other love, my Mustang, and still capable of giving off that distinctive exhaust growl. In fact, I drove it last night to my car club’s annual progressive dinner, and we rose and raised a round of applause for the name of the car that many of my fellow club members have owned, still own, and will now join that gallery of brands that have left us.

There’s a lot of speculation as to why G.M. decided to end the run of the Pontiac: the recession, the over-extension of the company’s reach to all markets, the lack of focus as to what Pontiac should be in an age when sporty and muscular were replaced by safe and frugal. Ironically, it might have been that what rescued the name fifty years ago was what killed it in the end, and if it had stayed as the dowdy maiden aunt, it would have survived. Personally, I think that if G.M. hadn’t spent the billions of dollars creating a brand — Saturn — out of nothing to try to build a better Honda or tried to go for the hip and trendy with the acquisition of Saab or the butch overcompensation of Hummer (which also expires tonight), they could have redefined both Pontiac and its pre-deceaser, Oldsmobile, and filled the needs of the automotive markets and given brands that have been through many evolutionary changes a chance to survive. Whatever the reason, it’s too bad that a brand that brought a lot of innovation and fun to driving had to fade away because someone forgot that they were there.

The last Pontiac rolled off the assembly line last November; tonight marks the end of the franchises with the Pontiac dealers. But for a lot of people, including those of us who have owned one of the 40 million cars with the name, it’s a passage from life to legend and fond memories, which is a pretty good way to go. 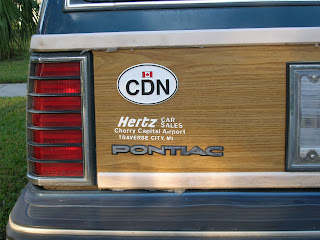 (In recognition that the car was built in Oshawa, Ontario, I added the CDN badge.)