Confounding Fathers — Sean Wilentz of The New Yorker traces the history of right-wing nutsery and conspiracy theories in America from the time of the Revolution through the Red Scare and Glenn Beck. 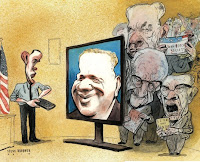 For the fractious Tea Party movement, Beck—a former drive-time radio jockey, a recovering alcoholic, and a Mormon convert—has emerged as both a unifying figure and an intellectual guide. One opinion poll, released in July by Democracy Corps, showed that he is “the most highly regarded individual among Tea Party supporters,” seen not merely as an entertainer, like Rush Limbaugh, but as an “educator.” And in the past few months Beck has established his own institute of learning: the online, for-profit Beck University. Enrollees can take courses like Faith 102, which contends with “revisionists and secular progressives” about the separation of church and state; Hope 102, an attack on the activist federal government; and the combined Charity 101/102/103, a highly restrictive interpretation of rights, federalism, and the division of powers.

During the “Restoring History” episode, Beck twice encouraged viewers to join his Web seminars, where they can hear “lessons from the best and brightest historians and scholars that we could find.” The B.U. faculty consists of three members, including one bona-fide academic, James R. Stoner, Jr., the chair of the political-science department at Louisiana State University; the other two are the head of a management consulting firm and the founder of WallBuilders, which the Web site calls “a national pro-family organization.” Beck himself often acts as a professor, a slightly jocular one, on his Fox News program. Surrounded by charts and figures, he offers explanations of current politics and history lessons about the country’s long march to Obama-era totalitarianism. The decline, he says, began with the Progressive era of the early twentieth century, in particular with the Presidency of Woodrow Wilson, when both the Federal Reserve System and the graduated federal income tax came into existence. “Wilson,” Beck told his radio audience in August, “just despised what America was.”

At a Tax Day rally this past spring, the veteran conservative organizer Richard Viguerie described the Tea Party as “an unfettered new force of the middle class.” And, indeed, calling Obama a socialist in the tradition of Woodrow Wilson is audacious enough to seem like the marker of a new movement—or, at least, a new twist in the nation’s long history of conspiracy-mongering. In fact, it marks a revival of ideas that circulated on the extremist right half a century ago, especially in the John Birch Society and among its admirers.

Beck’s version of American history relies on lessons from his own acknowledged inspiration, the late right-wing writer W. Cleon Skousen, and also restates charges made by the Birch Society’s founder, Robert Welch. The political universe is, of course, very different today from what it was during the Cold War. Yet the Birchers’ politics and their view of American history—which focussed more on totalitarian threats at home than on those posed by the Soviet Union and Communist China—has proved remarkably persistent. The pressing historical question is how extremist ideas held at bay for decades inside the Republican Party have exploded anew—and why, this time, Party leaders have done virtually nothing to challenge those ideas, and a great deal to abet them.

For all of that, though, there may be a lot less to the Tea Party than what you see on TV.

Weak Tea — Amy Gardner at The Washington Post has done an exhaustive investigation into the Tea Party “movement.” Despite all the publicity and promotion by the media and their own attention-grabbing, there’s not much there there.

In an unruly, unpredictable and chaotic election year, no group has asserted its presence and demanded to be heard more forcefully than the tea party. The grass-roots movement that was spawned with a rant has gone on to upend the existing political order, reshaping the debate in Washington, defeating a number of prominent lawmakers and elevating a fresh cast of conservative stars.

But a new Washington Post canvass of hundreds of local tea party groups reveals a different sort of organization, one that is not so much a movement as a disparate band of vaguely connected gatherings that do surprisingly little to engage in the political process.

The results come from a months-long effort by The Post to contact every tea party group in the nation, an unprecedented attempt to understand the network of individuals and organizations at the heart of the nascent movement.

Seventy percent of the grass-roots groups said they have not participated in any political campaigning this year. As a whole, they have no official candidate slates, have not rallied behind any particular national leader, have little money on hand, and remain ambivalent about their goals and the political process in general.

“We’re not wanting to be a third party,” said Matt Ney, 55, the owner of a Pilates studio and a founder of the Pearland Tea Party Patriots in Pearland, Tex. “We’re not wanting to endorse individual candidates ever. What we’re trying to do is be activists by pushing a conservative idea.”

The group, with 25 active members, meets to discuss policies and listen to speakers, Ney said. “We provide opportunities for like-minded people to get together,” he said.

The local groups stand in contrast to – and, in their minds, apart from – a handful of large national groups that claim the tea party label. Most of those outfits, including FreedomWorks and Tea Party Express, are headed by longtime political players who have used their resources and know-how to help elect a number of candidates.

The findings suggest that the breadth of the tea party may be inflated. The Atlanta-based Tea Party Patriots, for example, says it has a listing of more than 2,300 local groups, but The Post was unable to identify anywhere near that many, despite help from the organization and independent research.

In all, The Post identified more than 1,400 possible groups and was able to verify and reach 647 of them. Each answered a lengthy questionnaire about their beliefs, members and goals. The Post tried calling the others as many as six times. It is unclear whether they are just hard to reach or don’t exist.

First-Hand Knowledge — How much do you know about the Constitution of the United States?

How much do we need to know? Clearly, many of us are lacking even the basics. The First Amendment Center at Vanderbilt University has looked at Americans’ familiarity with its eponymous portion of the Bill of Rights, and the results would make Thomas Jefferson weep. While 61 percent of those surveyed this year knew that the First Amendment protects freedom of speech, just 23 percent volunteered that it also supports freedom of religion, and 18 percent cited freedom of the press. Freedom of association? Fourteen percent. Only 6 percent of those polled could cite the right to petition the government for grievances, the fifth major freedom guaranteed under the First Amendment.

The Delaware candidates are not alone: Sarah Palin and others also seem a bit in the dark about the First Amendment. Ms. Palin has seen violations of the Constitution in the hubbub over remarks about Muslims by the commentator Juan Williams, whose contract was terminated by NPR. But the First Amendment restricts the ability only of government to censor, not of private employers.

Still, the Delaware controversy, at least, does not mean that each of us must become a scholar who memorizes every jot and tittle, argued the libertarian conservative Eugene Volokh, a constitutional scholar at the University of California, Los Angeles, school of law.

As for Ms. O’Donnell, he said, “I don’t think she acquitted herself terribly well there,” since whatever she might actually know, she did not leave the impression that she was conversant in basic constitutional concepts.

Jack Balkin, a liberal constitutional expert at Yale Law School, said he was pleased to see Ms. O’Donnell and Mr. Coons actually discuss the nation’s founding texts. “I’m on Christine O’Donnell’s side in terms of constitutional literacy,” he said, wryly. “If her remarks in the debate cause Americans to pull out a copy of the Constitution and read it, that’s all for the good.”

Though they lived two centuries before the Internet, the founders knew that they were creating the first information-based nation, a new kind of republic powered by ideas and argument. To give the people who would vote for their leaders the tools to vote wisely, ideas and debate, conscience and faith had to be protected. And it all happens in the First Amendment.

Doonesbury — Cut to the Boehner.