Richard Iott, the Republican candidate for Congress from Toledo, used to have a rather interesting hobby. 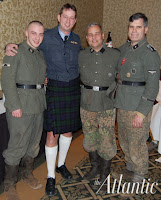 Mr. Iott appears dressed in a Nazi uniform, along with several other men, in a photo that accompanies the lead item on theatlantic.com.

The headline is “Why’s a GOP Candidate Dressed as a Nazi?”

The online article by Joshua Green begins, “An election year already notable for its menagerie of extreme and unusual candidates can add another one: Rich Iott, the Republican nominee for Congress from Ohio’s 9th District, and a Tea Party favorite, who for years donned a German Waffen SS uniform and participated in Nazi re-enactments.”

So, in other words, he used to spend his weekends having a Nazi Party.

Mr. Green writes that Mr. Iott’s name appears on a roster as early as 2003 of a group that re-enacts the Nazi’s 5th SS Panzer Division Wiking. Mr Iott told the writer that his interest in the group is “purely historical interest in World War II.”

Joining was a “father-son bonding thing,” Mr. Green quotes Mr. Iott. But he quit three years ago when his son lost interest, and so his name and photos were removed from the Wiking site, Mr. Iott told Mr. Green.

Far be it from me to offer parenting advice, but if you want to bond with your son, how about joining the Boy Scouts? Little League? Build a soap-box derby car? Those are the classic father-son kind of things people think of, not conquering Eastern Europe with tanks.

I’ll go out on a limb here and say that Marcy Kaptur, the Democratic incumbent, is assured of re-election.