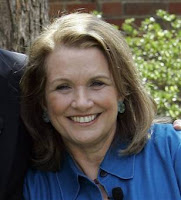 Elizabeth Edwards has died of cancer, NBC News has confirmed. She was 61.

Gravely ill with cancer that no longer responded to treatment, Elizabeth Edwards was reportedly not in any pain and was surrounded by family and friends, including her estranged husband, at home in North Carolina.

When rumors began to circulate that she had taken a turn for the worse, Edwards’ family announced Monday that her doctors had recommended against any additional treatment.

“Elizabeth has been advised by her doctors that further treatment of her cancer would be unproductive,” said the statement her family provided to NBC News. “She is resting at home with family and friends.”

John Edwards, from whom Elizabeth Edwards separated last year after he acknowledged fathering a child with a former aide to his unsuccessful vice presidential campaign, was with his wife and their three children: Cate, 28; Emma, 12; and Jack, 10.

I hold her and her family in the Light.