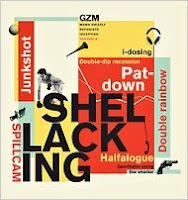 There are buzzwords and there are great words. (Retweet.)

Vuvuzela is a great word, one of the best to enter American popular culture in 2010, though it sounds nothing like an actual vuvuzela. A vuvuzela sounds like a long, droning moan, a sound full of garbage and tennis balls.

The vuvuzela’s long, plastic barrel provided Americans with the junk shot of sounds this year, the sort of noise you could hear even through a containment dome placed over a gushing underwater oil well owned by BP. (Though if you take a vuvuzela to the airport, you’re going to get an enhanced pat-down, sure as we could be entering a double-dip recession.)

Close your eyes while someone blows a vuvuzela and you can see all this clearly, as if it were playing on a spill-cam over your Web browser at work. Open them and it’s just a World Cup game highlight (speaking of great words: Uruguay vs. Ghana).

And the oil kept coming, all summer long, and with it new words — top kill, static kill, bottom kill — that meant failure, until at bottom they didn’t. (There may be put-backs for mortgage bonds. It doesn’t work so well with oil.)

Everyone was glad that the fish kill wasn’t as bad as it might have been. Dispersants may have worked. But the blowout preventer did not.

Refudiate is almost a better word than vuvuzela, because it’s not so much a real word as a neologism, one much of America attributes to Sarah Palin, the former governor of Alaska, who used it in a Twitter message in July. (She took a real shellacking for that.) The Oxford University Press called it the word of the year.

But refudiate was not Ms. Palin’s word first, even if she unpacked the portmanteau all by her lonesome. David Segal of The New York Times had it in print in late June, in an article about people who sell marijuana for a living. They are not easy to interview.

“Simple yes-or-no questions yield 10-minute soliloquies,” he wrote. “Words are coined on the spot, like ‘refudiate,’ and regular words are used in ways that make sense only in context.”

Oh, How Rich — Fred Grimm on the rich people who are running the state of Florida.

The rich are different from you and me. Well, me anyway. And they’re damn well positioned to keep it that way.

Florida not only got itself a fabulously wealthy governor (after he spent $73 million of his own money to get elected, maybe it’s more accurate to suggest Rick Scott got himself a state) but a Legislature laden with millionaires.

Eighteen millionaires will be slumming in the state Senate. That’s 18 out of 40 senators.

Down the hallway, 34 millionaires vote in the House. Out of 120 state reps. Rich reps are forced to mingle with the unwashed rabble.

The U.S. Congress wallows in even more disproportionate affluence than our elected moneybags in Tallahassee. According to the Center for Responsive Politics (a name plucked from the land of wishful thinking) 261 members of Congress are millionaires, and 55 are worth more than $10 million.

That was in 2009 — a tough year for most of us. Yet members of Congress seemed immune from the economic vagaries of the recession, upping their average wealth from 2008 by 16 percent. Just among the senators, median wealth rose from $2.27 million to $2.38 million.

A Bloomberg National Poll published last week indicated that only a third of Americans favored extending those famous Bush tax breaks for the wealthy. But our elected representatives, with some serious money at stake, had their own interests to represent.

Don’t expect the tea party revolution to much alter this economically lofty perspective in Congress. Politico reports that 25 percent of the newly elected Republicans are millionaires.

No wonder elected representatives, most of them happily ensconced on the sunny side of the income gap, have shown little interest in fixing America’s economic disparities. Sure, the top 1 percent of American earners took in 23.5 percent of the nation’s pretax income in 2007 — up from less than 9 percent in 1976. But that seems decidedly less alarming to pols when you golf every Sunday with the top 1 percent.

From Flop to Hit — “Almost, Maine” finds an audience way off Broadway.

It closed a month after it opened Off Broadway. Entertainment Weekly selected it as one of the worst shows of 2006. Most New Yorkers don’t even remember it. Yet John Cariani’s “Almost, Maine,” an earnest 19-character play about the romantic happenings one cold night in northern Maine, has since been produced around the world, including in Australia, Dubai and South Korea. A Spanish-language version will be presented this spring in Mexico City. More than 600 companies, amateur and professional, have put it on in the United States and Canada.

And move over, “Our Town,” and other staples of the school auditorium stage. “Almost, Maine,” which lost its entire $800,000 Off Broadway capitalization, was the most-produced play in North American high schools this year. It unseated Shakespeare’s “Midsummer Night’s Dream” from the No. 1 high school slot, according to Dramatics magazine’s Top 10 list.

“After it closed Off Broadway, I sort of put it behind me,” said Mr. Cariani, 41, who is also a Tony Award-nominated actor. “I had to make a living. I started auditioning again. But then it started to build like a snowball.”

While Mr. Cariani has done other acting parts, royalties from the play alone could have supported him over the last two years, he said. “It’s great because I don’t have to take every audition.”

Yet auditions are what led him to create the play. Raised in Presque Isle, Me., Mr. Cariani began writing vignettes about his home state to perform at auditions. In the late 1990s he started presenting them at Performance Space NBC in New York, a place where the television network would develop new talent. It was there that Gabriel Barre, a theater director, approached Mr. Cariani about stitching the stories into a play.

Craig Pospisil, the director of nonprofessional licensing for Dramatists Play Service, which has the North American rights to the show, described its slow build as a “real Cinderella story.”

“ ‘Almost, Maine’ is unique in terms of the length of the New York run versus number of productions and interest,” he explained.

Productions that have flopped in New York but succeeded elsewhere usually showcase big-name creative personnel, well-known titles, child-friendly material or a combination of all three (“Seussical”). It is much rarer to find a play that still attracts attention outside the city without those calling cards.

Doonesbury — Texting all the way.