According to the right-wing media, in addition to the fact that Barack Obama is a secret Muslim intent on turning this country into a shariah-bound Islamic holy land, he’s going to use his status as an honorary member of the Crow tribe to give America “back to the Indians.” (Not, as my friend Vikram is quick to point out, the Indians from India, but the people we call “Indians” who were here when the Europeans arrived.) 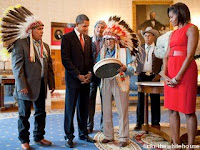 The outrage began after the President announced on December 16 that the U.S. would reverse course and support the United Nations Declaration on the Rights of Indigenous People. The Declaration was adopted by the U.N. General Assembly in 2007, but the U.S., under President Bush, opposed it.

“The aspirations it affirms — including the respect for the institutions and rich cultures of Native peoples — are ones we must always seek to fulfill,” the President said of the Declaration at White House Tribal Nations Conference where he announced the reversal. He went on to describe efforts to improve health care, education, and unemployment rates in tribal areas.

“While the declaration is not legally binding, it carries considerable moral and political force,” the State Department wrote of the Declaration, “and complements the President’s ongoing efforts to address historical inequities faced by indigenous communities in the United States.”

Of course the righties took umbrage at this symbolic move that carries no weight of law.

Last week, the “Director of Issues Analysis” for the Christian conservative American Family Association, Brian Fischer [sic], wrote a blog post claiming that “President Obama wants to give the entire land mass of the United States of America back to the Indians. He wants Indian tribes to be our new overlords.”

Mr. Fischer is referring to the language in the declaration that says that “Indigenous peoples have the right to the lands, territories and resources which they have traditionally owned, occupied or otherwise used or acquired,” and “States shall give legal recognition and protection to these lands, territories and resources. Such recognition shall be conducted with due respect to the customs, traditions and land tenure systems of the indigenous peoples concerned.” In other words, the declaration suggests that we live up to the treaties we signed with numerous native American tribes and communities and then tore up while the ink was still wet. But since it has no force of law, it’s just another photo op in the Oval Office and therefore just another reason for the right wingers to send out a fund-raising letter.

Well, if the righties want to get all worked up, they’re going to have to go back in time some 86 years and take it out on another president who started all this sucking up to the native Americans in the first place. That would be Calvin Coolidge, who signed the Indian Citizenship Act in 1924 that granted them full citizenship in America, filling in a loophole in the Fourteenth Amendment, and also maintained their rights to tribal property and treaties. In honor of the occasion, Mr. Coolidge donned a war bonnet (see picture).

By the way, if the American Family Association wants to make sure that there is no chance that we turn the country back to the First Nations, perhaps we ought to rid ourselves of any remnants of native influence. We could start by renaming all the states and locations that have native-connected names, like Massachusetts, Illinois, Iowa, Minnesota, Mississippi, Michigan, Ohio…