I’m not a scientist by any stretch of the imagination, but I’ve always loved a good story about the mysteries of our universe, and this is just plain cool. 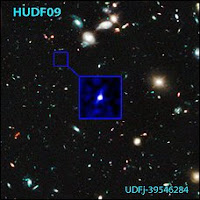 Hubble’s still got it.

The aging beauty of a space telescope has glimpsed a presumed galaxy that astronomers say might just be the oldest thing ever seen, a small, hot affair that blazed to life during the childhood of the cosmos.

Age of the possible galaxy: 13 billion years, give or take.

Although NASA’s Hubble has offered a generation’s worth of spectacular images – sparkling galaxies, billowing nebulae, stunning star clusters – its latest quarry lacks charisma. The presumed oldest galaxy is but a faint smudge on Hubble’s Ultra Deep Field image, the astronomical equivalent of a days-long staring contest.

Writing in the journal Nature, Bouwens and his team say they are 80 percent certain the object is, in fact, an ancient galaxy. They won’t know for sure until new telescopes come online over the next few years, particularly the over-budget James Webb Space Telescope, slated to replace Hubble in 2015.

Light from the presumed galaxy lies outside the range of human vision, smeared deep into the infrared by the extreme velocity at which the object is racing away from us – some 98 percent the speed of the light, the universe’s ultimate speed limit.

It kind of puts everything in perspective, doesn’t it?