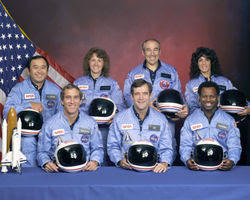 I was working in an office in the student union at the University of Colorado. I had the radio on, listening to classical music, when the announcer came on and said that there had been an “incident” with the shuttle launch. Then, through the wall which I shared with a pizza parlor, I heard the big screen TV come on with the news coverage from NBC. Everything stopped.