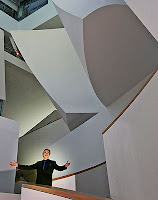 The story of how the world’s most celebrated living architect came to design an ingenious new music-academy campus and concert hall in Miami Beach goes back almost 60 years, to a rather prosaic circumstance: Frank Gehry, then a young, unknown Los Angeles architect, baby-sat a precocious 8-year-old named Michael Thomas.

A few years later, the piano prodigy would shoot to fame as an orchestral conductor under his full name, Michael Tilson Thomas. As so often happens with architects, it took Gehry longer, into his sixth decade, before he, too, gained world renown.

Umpteen Grammys and architectural accolades later, their long friendship has been cemented in a new, high-tech musical home for the New World Symphony — the Beach-based orchestra for young musicians that Tilson Thomas founded and leads — quite unlike any other concert hall anywhere.

As much Tilson Thomas’ handiwork as Gehry’s, the $160 million New World Center, which opens this week with a series of galas and concerts, bears their shared trademarks of edgy experimentation, intellectual rigor and artistic ambition tempered by unabashedly populist impulses.

A combination performance laboratory and finishing academy for music-school graduates, the gleaming music box aims no less than to nurture new audiences and modes of performance by remolding fusty conceptions of the classical concert hall.

Loaded with the latest digital technology — the fastest broadband capability, the sharpest HD cameras, the most powerful video projectors — the New World Center was conceived for maximum adaptability and appeal. Video art and live concerts will be projected in high definition onto a massive exterior wall to crowds gathered under palms and yellow Poincianas in a new city park, designed by Dutch firm West 8. Inside, the auditorium can morph from symphony hall to nightclub.

Baby Back Ribs — Carl Hiaasen has a few things to say to Baby Doc Duvalier as he returns to Haiti.

The return of Jean-Claude “Baby Doc” Duvalier to Haiti can mean only one thing: He blew through all the money he stole during his presidency, and he was hoping for another big score.

After nearly 25 years in luxurious exile — bankrolled by the people he betrayed — the deadbeat son of one of the hemisphere’s most brutal dictators shocked his homeland and the international community last week when he stepped off an Air France jet in Port-au-Prince.

“I came to put myself at the service of my country,” said Baby Doc, apparently auditioning to be a standup comedian.

Haiti needs more of Duvalier like it needs another earthquake.

As this column is being written, Jean-Claude is staying at a swank hotel in Petionville. He was released from police custody after being charged with corruption and embezzlement dating back to his time in power.

There’s no telling whether he’ll be prosecuted, deported or repatriated. One thing is true: If he’s still alive when this is published, he’s fortunate.

For almost three decades his family barbarously ruled Haiti, plundering the national treasury while further pauperizing a population that was already one of the world’s poorest.

The bleak and bloody era began with Francois “Papa Doc” Duvalier, whose fondness for torturing and murdering his political opponents became legendary. Upon his death in 1971, his son took over and was decreed president-for-life.

He kept intact the vicious Tonton Macoutes, a force of armed “volunteers” that his father had deployed to terrorize Haitian civilians and stomp out all dissent. He also preserved the tradition of corruption, many millions of dollars in foreign aid vanishing while the country’s feeble infrastructure continued to disintegrate.

As conditions worsened, thousands of Haitian began leaving on rickety boats for Florida, a migration that continues to this day in spurts.

While raw sewage ran in the streets, Duvalier and his glamorous, free-spending wife, Michele, lived and traveled like royalty. The kindest thing to be said about Baby Doc was that he wasn’t quite as horrible as his old man, although he still endorsed the imprisonment, mutilation and even murder of his critics.

Protests under Baby Doc were put down violently, but eventually the unrest became so widespread that it couldn’t be suppressed. In January 1986, Duvalier declared a state of siege and shut down the schools and universities, but by then it was too late.

Early on the morning of Feb. 7, Baby Doc fled — in style.

He drove Michele to the airport in a BMW sedan stuffed with soft-sided luggage from Gucci and Louis Vuitton. At 3:46 a.m., they gathered family members and boarded a C-141 Starlifter provided by the U.S. government.

And off they flew to France, the ignominy of their forced exit made bearable by the fortune they’d emptied from government banks before their departure.

What Should He Say? — The New York Times asked an array of op-ed columnists what President Obama should say in his State of the Union address this week. Here’s what Dan Savage suggested.

I’m not an idiot: Now that the Republicans hold the House, only wishful thinkers and the deeply delusional expect to see any movement on the lesbian, gay, bisexual and transgender legislative agenda this year or next. Nevertheless, President Obama should address gay rights in his State of the Union speech this week, and he should tackle the biggest, most meaningful right of them all: the right to marry.

When he was a candidate for the Illinois State Senate in 1996, Mr. Obama told a gay publication that he supported “legalizing same-sex marriages.” Twelve years later, right about the time he decided to run for president, he came out against marriage equality. But, as the president likes to say, “The arc of the moral universe is long but it bends toward justice.” Where a Gallup poll in 1996 found that just 27 percent of the nation supported equal marriage rights for same-sex couples, a CNN poll last summer found that a majority now supports marriage equality.

The president — perhaps after introducing Daniel Hernandez Jr., the openly gay intern credited with saving Representative Gabrielle Giffords’s life — should declare that the trend is clear: this country increasingly believes that Mr. Hernandez and other lesbian, gay, bisexual and transgender Americans should have all the same rights and responsibilities as other citizens.

Gay Americans are eventually going to win on marriage just like we won on military service, the president should tell Congress, so why not save everyone on both sides of the debate a lot of time, trouble and money by approving the entire gay rights agenda? Send the Employment Non-Discrimination Act, the Student Non-Discrimination Act, the Uniting American Families Act and the repeal of the odious Defense of Marriage Act to his desk for his signature.

He can assure the lawmakers that, yes, there’s something in it for Americans who disapprove of homosexuality too.

Social conservatives long to raise their children in a country where they don’t have to hear about homosexuality every time they turn on the news. I’d like raise my son in a country like that too. And guess what? In countries like Canada — where the fight over gay rights is essentially over, where there is gay marriage, open military service and employment protections — homosexuality hardly ever makes the front pages of newspapers. There’s nothing much to report.

Conservatives can’t get rid of us, but they can hear less from and about us. They just have to bend toward justice.