Last night I had the patio door open to enjoy the nice warm evening. It’s usually pretty quiet in my neighborhood, which is a nicely-wooded suburb south of Miami. I had the TV on, watching a movie, when I heard an owl hooting.

At first I thought it was from the TV, but the movie was the 1942 classic To Be Or Not To Be with Jack Benny and Carole Lombard, and I don’t think that there were too many owls in downtown Warsaw during World War II. I hit the mute button and waited. A moment later I heard it again.

I’ve been a bird-watcher since I was a kid, and I’ve always had a special fascination with owls; one of my prized toys as a kid (before Snowball) was a little Stieff owl that I called Whittle. I also had the Cornell Lab bird song records, and I knew immediately that I was hearing the call of a Great Horned Owl. 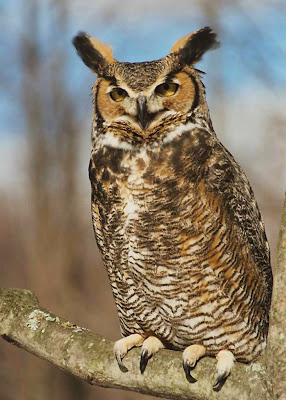 This was not my first encounter with this magnificent bird. When I lived in Northern Michigan, a pair had a nest in the pine woods across the road from my office and occasionally I would see them perched on the branches, their unmistakable silhouette against the sky as they waited for dinner to walk by on the forest floor below. I’ve also heard their call before. But last night was the first time I’d heard it so close.

I went out to the patio to see if I could at least get a location, and when it hooted again, it sounded like it was coming from the large live oak that is on the edge of the waterway behind the house. That would be a good place to hunt for food, but I couldn’t see anything, and after one more call, it stopped.

My neighborhood gets a lot of interesting wildlife for being a suburb. I’ve seen peacocks, parrots, storks, herons, and there’s a gang of ibises that regularly show up to nibble on the bugs in the yard. (In downtown Miami I’ve heard roosters crowing before dawn as I walked from the parking lot to my office.) But it’s nice to know that there are still some wildlife surprises out in the backyard.