Ross Douthat says that President Obama won’t call the Libyan situation a “war” and then asks him four important questions: what are our objectives, who are the rebels we’re helping, who gets it next, and why is Libya so important anyway?

Those are all valid questions, but I might not feel like Mr. Douthat and the rest of the conservative surrender monkeys weren’t being such concern trolls if they had had the temerity to ask the same questions about Iraq to President Bush and demanded the answers so impatiently. 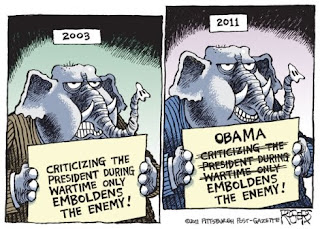 Cartoon by Rob Rogers of the Pittsburgh Post-Gazette.