Rick Scott’s Medicaid Overhaul — Suzy Khimm of Mother Jones reports that Florida’s governor is pushing a privatization plan that could be a major boon for health care companies. Like his. 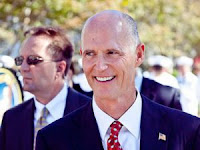 Republican governor Rick Scott’s push to privatize Medicaid in Florida is highly controversial—not least because the health care business Scott handed over to his wife when he took office could reap a major profit if the legislation becomes law.

Scott and Florida Republicans are currently trying to enact a sweeping Medicaid reform bill that would give HMOs and other private health care companies unprecedented control over the government health care program for the poor. Among the companies that stand to benefit from the bill is Solantic, a chain of urgent-care clinics aimed at providing emergency services to walk-in customers. The Florida governor founded Solantic in 2001, only a few years after he resigned as the CEO of hospital giant Columbia/HCA amid a massive Medicare fraud scandal. In January, he transferred his $62 million stake in Solantic to his wife, Ann Scott, a homemaker involved in various charitable organizations.

Florida Democrats and independent legal experts say this handover hardly absolves Scott of a major conflict of interest. As part of a federally approved pilot program that began in 2005, certain Medicaid patients in Florida were allowed to start using their Medicaid dollars at private clinics like Solantic. The Medicaid bill that Scott is now pushing would expand the pilot privatization program to the entire state of Florida, offering Solantic a huge new business opportunity.

“This is a conflict of interest that raises a serious ethical issue,” says Marc Rodwin, a medical ethics professor at Suffolk University Law School in Boston. “The public should be thinking and worrying about this.”

With Scott’s blessing, the Florida statehouse is currently hammering out the final details of the Medicaid bill, with a vote expected in the upcoming weeks. In the meantime, Scott has moved forward on another front that could also bring new business to Solantic. On Tuesday, he signed an executive order requiring random drug testing of many state employees and applicants for state jobs. He’s also urged state legislators to pass a similar bill that would require drug testing of poor Floridians applying for welfare.

Among the services that Solantic offers: drug testing.

OK, put your books away. We’re having a pop quiz.

Below are four quotes. Each is from one of two sources: the Bible or the Koran, although, just to make things interesting, there’s also a chance all four are from one book. Two were edited for length and one of those was also edited to remove a religion-specific reference. Your job: identify the holy book of origin. Ready? Go:

3) “If your very own brother, or your son or daughter, or the wife you love, or your closest friend secretly entices you, saying, ‘Let us go and worship other gods’ . . . do not yield to him or listen to him. Show him no pity. Do not spare him or shield him. You must certainly put him to death.”

All right, pens down. How did you do?

Yes, there is a point here: I wish people would stop cherry-picking warlike quotes from the Koran to “prove” the evil of Islam. You see this stuff all over the web. Just a few days ago, some anonymous person, angry with me for defending “Fascist/Nazi Islam” the writer says is trying to kill us all, sent me an e-mail quoting Koranic exhortations to violence to prove that Islam is a “religion of hate and murder.”

As rhetorical devices go, it is a cheap parlor trick, a con job to fool the foolish and gull the gullible and for anyone who has spent quality time with the Bible, its shortcomings should be obvious.

If not, see the pop quiz again. The Koran is hardly unique in its admonitions to take up the sword.

It is not my intention here to parse any of those troubling quotes. Let us leave it to religious scholars to contextualize them, to explain how they square with the contention that Islam and Christianity are religions of peace. For our purposes, it is sufficient to note that, while both Christian and Muslim scholars will offer that context and explanation, only Christians can be assured of being taken at their word when they do.

Christians get the benefit of the doubt. Muslims get Glenn Beck asking a Muslim Congressman to “prove to me that you are not working with our enemies.”

Because Christianity is regarded as a known — and a norm. Muslims, meantime, have been drafted since Sept. 11, 2001, to fulfill the nation’s obsessive, historic, paranoiac and ongoing need to rally against an enemy within. We lost the Commies, but along came the Islamo-fascists. The names change. The endless capacity for irrational panic remains the same.

Some of us use lies, exaggerations and rhetorical gobbledygook to instill in the rest of us that irrational panic they breathe like air. Yes, it is only sensible to fear the threat we face from terrorism. But panicked, irrational people are capable of anything.

Might be wise if we chose to fear that, too.

Con or Not? Spring Hill, Tennessee, is waiting to see if Festival Tennessee is the real deal or an elaborate con.

Earlier this month, at a news conference in a field on the east side of the city, a man named Dennis W. Peterson announced that he was bringing a theme park to the Tennessee countryside.

The park, he said, would be called Festival Tennessee, and it would cost around $750 million. On these bucolic 1,500 acres, there would be two resort hotels with 4,000 rooms apiece. There would be 80 restaurants and clubs, as well as one of the largest water parks in the United States. And a stadium. And, with any luck, an NBA franchise. And a television production studio. Also, a charter school.

Mr. Peterson estimated that Festival Tennessee would create 15,000 jobs, maybe even 20,000. And, he said, it would be open in less than two years.

People had a few questions: Who was this man? What was his background? Where was he getting the money for all this? What happened to his front teeth? (They were recently lost, he explained to reporters, to a crispy chicken wing at Hooters.)

Michael Dinwiddie, the mayor of Spring Hill, was one of the only people to know about the project, having quietly worked on it with Mr. Peterson for two months. It thrilled him. For a small city like Spring Hill, 45 minutes from Nashville, it was the magic kingdom of economic development.

In surrounding Maury County, the unemployment rate is around 14 percent, a result of the recession and a 2009 decision by General Motors to stop producing Saturns at the plant here.

Spring Hill itself was not as dependent on the plant. A quiet farming town only a few decades ago, it has become a bedroom community for people who work in Nashville and its suburbs.

But this could turn Spring Hill into a destination. “This project will also generate tens of millions of dollars in sales tax and property tax revenues,” Mr. Dinwiddie said at the news conference.

Still, there was something curious about the whole thing. For one, no one had contacted state authorities about the plans.

Local reporters and bloggers uncovered more oddities, starting with Mr. Peterson’s company, the Big International Group of Entertainment. The company, it was discovered, had its license revoked last year by the State of Nevada. The company’s president, Roger Kidneigh, who did not return messages seeking comment, had declared personal bankruptcy, claiming assets of less than $200,000.

Reached by phone, the woman listed as the company’s treasurer said she had never actually worked for Big International Group and did not want her name associated with it.