Republicans in both the House and Senate have introduced legislation that would declare English the official language of the United States and require the development of English language testing guidelines for those applying for U.S. citizenship.

The English Language Unity Act would set out a new chapter in U.S. code that imposes an obligation on U.S. officials to “preserve and enhance the role of English as the official language of the Federal Government.”

It’s a good thing they’re limiting it to “reading and understanding” English because if it was up to spelling ability, most of the Tea Party would have to be deported. 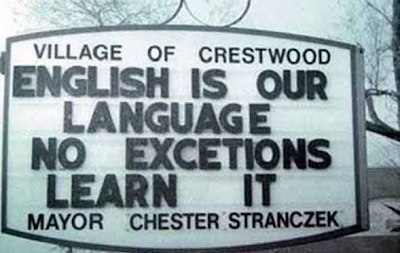 This pops up every so often as yet another way of saying “America! Fuck yeah!” by the right wingers and really doing the GOP a ton of good will in reaching out to minorities.

By the way, how many jobs will this bill create?