From the Miami Herald, the University of Miami is closing the old Rathskeller. 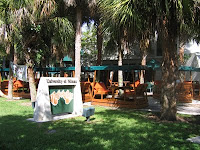 It’s the big question at the University of Miami these days: Where, wonders grad student Tommy Kiger, will he get a beer and watch the ballgame?

For the past five years, Kiger has been a regular at UM’s on-campus Rathskeller — better known as the Rat. Since 1972, the lakeside hangout has served countless pitchers of beer and plates of chicken fingers, and played host to innumerable games of pool and darts. But at midnight Friday, the original Rat closed for good.

This summer, it will be demolished to make room for a new student activity center. The one consolation: UM administrators assure students that it will have a new Rat.

“Closing it makes me sad,” said Kiger, 23, an engineering student, who took photos of himself and his friends by the restaurant’s sign Thursday. “The food’s good, the beer’s good, there’s a lake. I don’t understand what else you could want. I would not change a thing.”

The Rat arrived on campus at an auspicious moment, in December 1972.

“In 1973, the drinking age was reduced to 18,” recalled Norm Parsons, UM’s director of wellness and recreation. “You can imagine the euphoria. These were the Vietnam days, the love-ins, the demonstrations. The Rat became the hub of culture. It provided a social environment on campus.”

And I was there when it opened; it was my sophomore year. The Rat was built in the corner of a parking lot next to the student union and near the Ring Theatre, so we theatre students had watched it being built as we made our way over to our then-hang out spot in the Hurricane dining room. When it had its grand opening, we participated in some of the ceremonies. It was a nice place to go for lunch, but after rehearsals — especially the late ones as we got close to opening a show — we went to Bill & Ted’s, an old-fashioned bar in a little cinder-block building situated in the corner of a shopping center parking lot near the intersection of Red Road and US 1. It was smaller, quieter, and the beer was cheaper.

When I moved back to Miami ten years ago, I’d have dinner at the Rat before going to a show or when I was helping the Old Professor build scenery. It still had the good onion rings and hefty cheeseburgers, and though I no longer drink beer, it was a nice place to sit and notice that the college students of 2011 didn’t look all that much different than those of 1972… except they’re all really young.