Yea, Verily — Charles McGrath on why the King James Version of the bible endures. 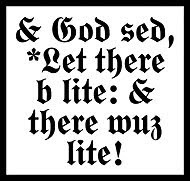 From the start, the King James Bible was intended to be not a literary creation but rather a political and theological compromise between the established church and the growing Puritan movement. What the king cared about was clarity, simplicity, doctrinal orthodoxy. The translators worked hard on that, going back to the original Hebrew, Greek and Aramaic, and yet they also spent a lot of time tweaking the English text in the interest of euphony and musicality. Time and again the language seems to slip almost unconsciously into iambic pentameter — this was the age of Shakespeare, commentators are always reminding us — and right from the beginning the translators embraced the principles of repetition and the dramatic pause: “In the beginning God created the Heauen, and the Earth. And the earth was without forme, and voyd, and darkenesse was vpon the face of the deepe: and the Spirit of God mooued vpon the face of the waters.”

The influence of the King James Bible is so great that the list of idioms from it that have slipped into everyday speech, taking such deep root that we use them all the time without any awareness of their biblical origin, is practically endless: sour grapes; fatted calf; salt of the earth; drop in a bucket; skin of one’s teeth; apple of one’s eye; girded loins; feet of clay; whited sepulchers; filthy lucre; pearls before swine; fly in the ointment; fight the good fight; eat, drink and be merry.

But what we also love about this Bible is its strangeness — its weird punctuation, odd pronouns (as in “Our Father, which art in heaven”), all those verbs that end in “eth”: “In the morning it flourisheth, and groweth vp; in the euening it is cut downe, and withereth.” As Robert Alter has demonstrated in his startling and revealing translations of the Psalms and the Pentateuch, the Hebrew Bible is even stranger, and in ways that the King James translators may not have entirely comprehended, and yet their text performs the great trick of being at once recognizably English and also a little bit foreign. You can hear its distinctive cadences in the speeches of Lincoln, the poetry of Whitman, the novels of Cormac McCarthy.

Not everyone prefers a God who talks like a pal or a guidance counselor. Even some of us who are nonbelievers want a God who speaketh like — well, God. The great achievement of the King James translators is to have arrived at a language that is both ordinary and heightened, that rings in the ear and lingers in the mind. And that all 54 of them were able to agree on every phrase, every comma, without sounding as gassy and evasive as the Financial Crisis Inquiry Commission, is little short of amazing, in itself proof of something like divine inspiration.

Well, you have to admit that any book that starts off with two naked people and a talking snake has got something going for it.

A Voice in the Wilderness — David Frum, one of the few moderate (i.e. not nuts) conservatives left in the GOP, concludes that having a welfare state is not altogether a bad thing.

Which does not mean that I have become suddenly indifferent to the growth of government. Not at all. Paul Ryan is absolutely right that the present trend is unsustainable and must be corrected. The free marketeers of the 1980s were right that taxes on enterprise must be restrained to leave room for private-sector-led expansion. Over-generous social insurance has all kinds of negative consequences. Private saving must be encouraged. Work must pay better than idleness. The job of designing the right kind of social insurance state is hugely important and hugely difficult, and the conservative sensibility – with its respect for markets and less sentimental view of human nature – is the right sensibility for that job.

Yet that same conservative sensibility is also properly distrustful of the fantasy that society can be remade according to a preconceived plan. We have to start from where we are, and we have to take people as we find them. Ronald Reagan liked to quote a line of Tom Paine’s, “We have it in our power to make the world new again.” George Will – although a great Reagan admirer – correctly complained at the time, “No, we don’t.”

I strongly suspect that today’s Ayn Rand moment will end in frustration or worse for Republicans. The future beyond the welfare state imagined by Yuval Levin will not arrive. At that point, Republicans will face a choice. (I’d argue we face that choice now, whether we recognize it or not.) We can fulminate against unchangeable realities, alienate ourselves from a country that will not accede to the changes we demand. That way lies bitterness and irrelevance. Or we can go back to work on the core questions facing all center right parties in the advanced economies since World War II: how do we champion entrepreneurship and individualism within the context of a social insurance state?

To William and Catherine — Leonard Pitts, Jr. wishes the royals a happily-ever-after.

There is something about a wedding.

There is the finery, and the formality, of course, the dress with the long train, the tux with the bowtie that pinches, the speaking your heart and making your promises as everyone you ever knew stands witness.

There is, as well, the sense of ritual, the timelessness of ceremony that traverses and unites generations. Sean and May (he is the son of friends) got married in a Davie park a little over a year ago, wreathed in white and hope and looking all of 12 years old. And at some point, reality shimmered, he was me and she was Marilyn, and it was a small chapel in Hollywood, Calif., on a Saturday in June 30 years ago – 30 years ago! – and we were saying our vows, giddy, young, and stupid with love.

On Friday, it will be William and Kate’s turn.

Much of the world will be watching, drawn by the promise of finery, formality and ritual on a royal scale. But see, there is something else about a wedding, something that speaks to deeper yearnings. In some sense, a wedding is an act of faith.

Lord knows we could use a few of those just now.

For an increasing number of us, it is conventional wisdom that we are in a time of decline, erosion eating at us like tooth decay. There is a sense that we have burned down our tomorrows and left ourselves only yesterdays to look forward to. There is a fear that we must henceforth make peace with lowered skies and diminished expectations.

This is quantified in a 2010 Gallup poll that finds 34 percent of all Americans pessimistic about the nation’s future, more than at any time in the last 30 years. It is also quantified by marriage itself, which is becoming a rarity.

Small wonder. To get married is to make a bet on always and forever. To stay married is a function of will and work, even more than of love. The capacity and willingness to make that bet, to put in that work, to bear down with that will, are slowly disappearing from American life. Fifty years ago, close to 70 percent of all American adults were married. Now it’s about 54. Britain has seen similar trends. We marry less, we marry later, we make marriage a reality show, we see our cynicism validated by Hollywood marriages that pop like soap bubbles.

A wedding, then, is not just an act of faith, but also one of defiance. Particularly for someone like William who is, after all, the child of a marriage that began as a fairytale and ended as a horror story. Royal obligations aside, one could hardly blame him if he chose to bag the whole idea.

Instead, he will stand in the storied old church, promise himself to someone else and hear the same from her, like a million couples a million times before. There is something in it to gladden the cynical eye and hearten the pessimistic heart.

So consider this a toast to the happy couple — and to acts of defiance and faith. Fifty years from now, may it be said that they achieved something that has eluded so many of us for so long we find it hard to believe in it anymore. May it be said they left that place as husband and wife.

And they lived happily ever after.