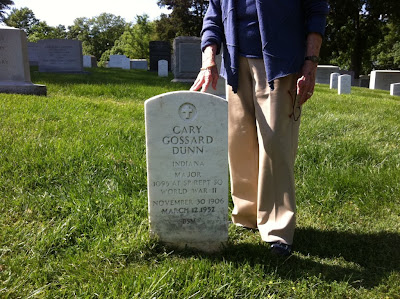 Cary Gossard Dunn was my great uncle, the younger brother of my maternal grandmother. He was born in 1906 in Indiana, one of four children. He married and had two children of his own.

I never knew him; he died in March 1952, six months before I was born. I knew he served in the military and had heard that he had been part of the D-Day invasion on Normandy in 1944. I don’t have a picture of him, but I remember seeing one in my grandmother’s photo album: a young man with familiar family features and a smile that he shared with my grandmother.

Earlier this month, my parents and my brother and sister-in-law went to Arlington National Cemetery to find Uncle Cary’s grave. For some reason, the cemetery administration has no record of his burial, but through his daughter Susan they located it and took some pictures. The one on the post is my mother standing next to her uncle’s grave marker.

I wrote to Susan and asked for information about her father’s service. I got back her reply just the other day.

“He was with the 467th Antiaircraft Artillery Automatic Weapons Battalion and was in the original landing at Omaha Beach, June 6, 1944. His rank was Captain and he saw service in Northern France, the Ardennes, and the Rhineland before returning to the states in 1945. He was awarded the Bronze Star. He left the military for a brief period of time, but rejoined and was promoted to Major and taught ROTC at the University of Pittsburgh for about two years. He was transferred from the Army to the Air Force in 1949 and was sent to Okinawa in 1950 where he worked as an engineer at Kadena AFB. He died of cancer at Barksdale AFB, Shreveport, Louisiana, on March 12, 1952 at the age of 45.”

I wish I had known him. Given his siblings’ long lives (my grandmother lived to be 95), I would have been able to learn about what his service meant to him as I was becoming aware of my own feelings about war and peace, and to put a real connection between the stories I read in history books and the lurid tales depicted in the Hollywood movies about the war.

Susan’s description of her father’s service captures the simple facts, but like the men who served and tell their stories in such tales as Band of Brothers, the simplicity does not tell of the pain and the burden these men and women carried in service to our country then and now, and the honor and pride they have in doing their duty without any other thought than protecting the rest of us.