Was the Florida legislature in such a hurry to get things done while under the watchful eye of the Tea Party that they passed a ban on sex?

Question: If your elected officials fail basic taxonomy, promote anti-science curriculum, and consistently attempt to undermine the fundamental unpinning of all biology, what happens when they start trying to legislate from this flawed view of reality?

The answer is this poorly-worded miasma of a law recently passed in Florida, which presumably was designed to prevent bestiality and promote animal welfare, but which has actually made it illegal, effective October 1, 2011, for anyone to have sex in Florida.

Southern Fried Scientist has provided a handy chart for these geniuses to understand that human beings — with some notable exceptions — are animals, too, despite what they may have read in their faerie stories about Adam and Eve. 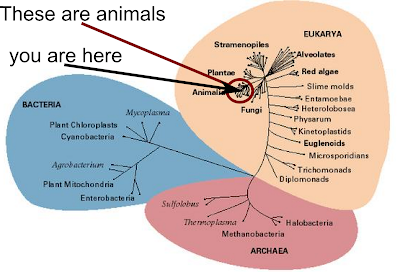 The legislators that came up with this presumably are the product of Florida’s education system…before they cut back the funding.

Well, actually, no, they didn’t really ban sex. The law does distinguish between “persons” and “animals,” but there’s your slippery slope; I’ve seen some of our elected leaders in person.