Donald Trump is taking his toys and going home: 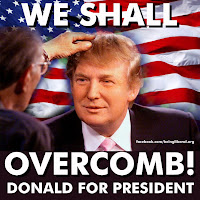 Donald J. Trump announced on Monday that he would not seek the presidency, a development less important for the Republican field or his national political future — if he ever had one — than for what it said about a media culture that increasingly seems to give the spotlight to the loudest, most outrageous voices.

Mr. Trump spent months earnestly portraying himself as a potential nominee for a party whose coalition includes family values activists, antigambling religious leaders and deficit hawks, some of whom might just have blanched at his two divorces, casino holdings, penchant for debt financing and formerly liberal positions on some issues.

To some degree he succeeded, using a combination of attributes that made him uniquely qualified to capitalize on the times: Near-universal name recognition (enhanced by his prime-time berth on NBC as the host of “Celebrity Apprentice”), gobs of cash and two decades of experience putting his outsize personality to use in the service of headline creation, starting in the pre-Internet era with the New York City tabloids.

The news came at the same time that NBC announced its fall line-up, including Mr. Trump’s program. Coincidence?