The latest request from the Tea Party: we’ll raise the debt ceiling if you’ll reinstate DADT.

This came from William Temple, the chairman of Tea Party Founding Fathers, and he came to the meeting in full 18th century drag. 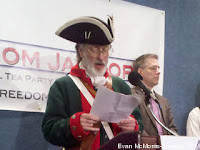 When the Pentagon’s own studies show that military effeminization may have an extremely costly impact on recruiting and retention, when Islamists have shown their willingness to sexually brutalize American female reporters, why would John Boehner’s House Republicans be caving to political correctness? Why would House Republicans who know better be fostering inappropriate attractions in the intimacy of tents, bunks, barracks, platoons, subs, tanks, convoys, cockpits, latrines, showers, toilets and locker rooms when we are fighting wars in three Muslim nations?

Yeah, someone has issues.