Assisted Hell — The Miami Herald begins a three-part series on the abuses in the assisted-living system in the state.

For more than a decade, Bruce Hall ran his assisted-living facility in Florida’s Panhandle like a prison camp.

He punished his disabled residents by refusing to give them food and drugs. He threatened them with a stick. He doped them with powerful tranquilizers, and when they broke his rules, he beat them — sending at least one to the hospital.

“The conditions in the facility are not fit even for a dog,” one caller told state agents.

When Florida regulators confronted Hall in 2004 over a litany of abuses at his facility in the rolling hills of Washington County, they said he chased them from the premises while railing against government intrusion.

Under state law, regulators could have shut down Sunshine Acres Loving Care or suspended the home’s license, but they did neither. Instead, they ordered the 50-year-old Hall to see a therapist for his anger and to promise not to use “any weapon or object” on his residents — allowing him to keep his doors open for five more years.

In that time, Hall went on to break nearly every provision of Florida’s assisted-living law: He threw a woman to the ground, and forced her to sleep on a box spring for six days after she urinated on her covers. Though the temperature outside reached 100 degrees, he forced his residents to live without air conditioning. And during a critical overnight shift, he fell asleep on the job while a 71-year-old woman with mental illness wandered from her bed, walked out the door and drowned in a nearby pond.

In a state where tens of thousands reside in assisted-living facilities, the case of Hall’s Sunshine Acres represents everything that has gone wrong with homes once considered the pride of Florida.

Created more than a quarter-century ago, ALFs were established in landmark legislation to provide shelter and sweeping protections to some of the state’s most vulnerable citizens: the elderly and mentally ill.

But a Miami Herald investigation found that the safeguards once hailed as the most progressive in the nation have been ignored in a string of tragedies never before revealed to the public.

In Kendall, a 74-year-old woman was bound for more than six hours, the restraints pulled so tightly they ripped into her skin and killed her.

In Hialeah, a 71-year-old man with mental illness died from burns after he was left in a bathtub filled with scalding water.

In Clearwater, a 75-year-old Alzheimer’s patient was torn apart by an alligator after he wandered from his assisted-living facility for the fourth time.

The deaths highlight critical breakdowns in a state enforcement system that has left thousands of people to fend for themselves in dangerous and decrepit conditions.

The Miami Herald found that the Agency for Health Care Administration, which oversees the state’s 2,850 assisted-living facilities, has failed to monitor shoddy operators, investigate dangerous practices or shut down the worst offenders.

Time and again, the agency was alerted by police and its own inspectors to caretakers depriving residents of the most basic needs — food, water and protection — but didn’t take action.

When AHCA agents were forced to end their inspection of Sunshine Acres in 2008 because of threats by the owner — the second time in four years — the agency didn’t return for eight months.

Could Canada Go Left? — E.J. Dionne looks at the election tomorrow and sees a surprise brewing.

Alas, Americans don’t pay much attention to politics in Canada, our most reliable ally. That might change Monday night when returns roll in from the Canadian election. If the polls are right — and there are a lot of “ifs” — our friendly neighbor to the north is brewing a political revolution.

The big news out of Canada is that North America’s largest social democratic party — that would be Canada’s New Democratic Party, or NDP — threatens to displace the centrist Liberal Party as the country’s main opposition. Even more astonishingly, the NDP has an outside chance of winning the most seats in the election.

When the campaign started, the likeliest outcome was that Prime Minister Stephen Harper’s Conservative Party would win again, probably with a minority of seats in Parliament, but with a real possibility of securing a majority.

The Liberals, the Conservatives’ traditional challengers (and, until recently, the natural governing party in Canada) were not seen as likely to win, but they did have real hopes of recovering after a disastrous election in 2008, when they lost 26 seats in Canada’s 308-member Parliament.

At the beginning of the campaign, the Liberals’ new leader, Michael Ignatieff, got high marks from the media for running an open, friendly and informal campaign. An academic and human rights campaigner who spent years in the United States, Ignatieff surprised many people with how good a campaigner he had become.

But the Conservatives had roughed Ignatieff up with a tough pre-campaign advertizing blitz, and they continued to hit him hard after the opening gun was sounded. In the meantime, NDP leader Jack Layton proved the perfect match for the moment with a kind of low-key charisma and a campaign rooted in a promise to shake up Canada’s political system. The NDP is a long-time third party in Canada, with an appeal rooted in the unions and in left-populist sentiment on Canada’s prairies. But Layton expanded his party’s appeal from its base to a broad middle ground that seems turned on by his energy and the possibility of something entirely new. 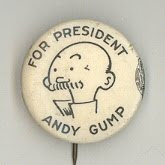 The Presidential candidacy as joke is a perennial sideshow along the raucous midway of the American political carnival. Sometimes the candidate—Will Rogers (1928), Gracie Allen (1940), Pat Paulsen (1968 through 1996), Stephen Colbert (2008)—is a fully qualified professional humorist. Sometimes he, or it, is an animal, barnyard (Pigasus, the Yippie mascot, 1968) or cartoon (Pogo, the comic-strip possum, 1952). Sometimes—like Lar Daly, the Chicago eccentric who, in 1956 and three times thereafter, campaigned in an Uncle Sam suit—he appears to be in on the joke. Sometimes he doesn’t. The first two or three times that Harold Stassen, a talented progressive who at age thirty-one had been elected governor of Minnesota, sought the Republican nomination, his candidacy was taken seriously, and rightly so. By the fifth or sixth time, he was a punch line. By the ninth—in 1992, when he was eighty-five—the poignancy of it all muted the laughter.

The joke candidate of the present moment partakes of many of the qualities of those who have gone before, but the precursor he most strikingly resembles, perhaps, is the late Bishop Homer A. Tomlinson. Like Bishop Tomlinson, the 1952, 1960, 1964, and 1968 Presidential nominee of the Theocratic Party, Donald Trump is a repeat aspirant, having previously proclaimed his readiness to occupy the nation’s highest office in 1988 and 2000. Tomlinson lived in a little frame house in Queens; Trump grew up in a big house (some two dozen rooms, twenty-foot Georgian columns on the portico) in the same borough of New York. Like Trump, Tomlinson had a business background: before joining the pastorate, he was C.E.O. of his own advertising agency. Like the Bishop, the Donald is a person of faith. Tomlinson was top man in a spinoff of the Church of God, part of the Pentecostal movement. Trump is a Christian, too. “I think that the Bible certainly is—it is the book,” Trump told an interviewer for the Christian Broadcasting Network recently. “I’m a Presbyterian. And you know, I’ve had a good relationship with the church over the years.” But the decisive similarity is a level of megalomania unusual even in people who consider themselves entitled to supreme power. Between elections, Bishop Tomlinson travelled the world with a portable throne, crowning himself, among other things, King of Belgium, King of Ethiopia, Tsar of Russia, and, finally, King of the World. Trump thinks no less highly of himself.