Senate Minority Leader Mitch McConnell (R-KY) made it clear yesterday that any deal to raise the debt ceiling will not include any tax increases. Period, the end; Maestro, cue the exit music. 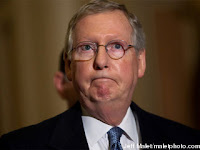 In the hours before an evening meeting with President Obama, and in a number of different venues, Senate Minority Leader Mitch McConnell renewed his insistence that Republicans will not accept any tax increases as part of a trillion-dollar deficit reduction package the GOP is demanding before agreeing to let the country pay all its bills on time.

But according to a top Democratic aide, Obama and Senate Majority Leader Harry Reid (D-NV) agreed at a White House meeting Monday morning that any such package must take “a balanced approach, and that revenues need to be a part of that approach, especially ending taxpayer-funded giveaways to corporations that don’t need them.”

Democratic aides aren’t offering a complete list of the tax measures they want Republicans to consider, or how much each measure is expected to raise. Multiple accounts, however, indicate they want tax measures to raise $400 billion over the next 10 years — 20 percent of the $2 trillion they hope to cut from the deficit overall.

But McConnell doesn’t really want to touch the tax code to reduce the deficit at all.

It’s no secret that the only reason he’s doing this is to deprive the president of a deal. Mr. McConnell has said that his goal is to make Mr. Obama a one-term president, and this is just one more way to do it.

Visit msnbc.com for breaking news, world news, and news about the economy

I maintain that anyone with any sense of history and insight to the way the right-wing mind works could have predicted this long ago. These people do not take losing at all well, and they have never seen the election of a Democrat to be anything but a scam, a fraud, and a criminal act: “How could the American public be so WRONG as to elect HIM!?!”

I’d like to think that Mr. Obama is fully aware of this plan and has told Mr. McConnell and Mr. Boehner that if they want to take him and the economy down just to avenge the defeat of John McCain, then he’s going to take them down with him; or they could put the needs of the country and the global economy first and come up with something that has nothing whatsoever to do with gaining political advantage. I’m fully confident that will happen right after I see pigs fly.