So after all the talk, all late-night and weekend trips to the White House, all the back-room chatter, the best that House Speaker John Boehner can come up with is a polished turd?

Republicans insisted that if the president wants his debt ceiling increase, the American people will require serious spending cuts and reforms. This two-step approach meets House Republicans’ criteria by (1) making spending cuts that are larger than any debt ceiling increase; (2) implementing spending caps to restrain future spending; and (3) advancing the cause of the Balanced Budget Amendment – without tax hikes on families and job creators. Although this is not the House-passed “Cut, Cap, and Balance,” it is a package that reflects the principles of Cut, Cap, and Balance.

Okay, at the risk of being breathtakingly obvious, the debt ceiling process is not about holding President Obama “accountable.” (What is up with the middle-school neener-neener nyah-nyah name of this bill anyway?) The debt ceiling is the responsibility of the Congress, which, unless they’ve changed the Constitution in the last eight hours (which is certainly not outside the realm of possibility), is the branch of government that holds the purse strings. They are the ones who write the budget and allow the the spending, not the Executive branch. So this passing-the-buck for their profligate ways, including the indulgences under the Bush administration (see below), is just infantile.

This has all the appearance of a hashed-together did-his-homework-on-the-bus plan that Mr. Boehner came up with by grabbing everything that sucked out loud in the “Cut, Cap and Balance” silliness that they horked up last week and tried with straight face to pass as a real attempt at fiscal management. That’s probably because they got caught with their lips on the Tea Party tuchus when Senate Majority Leader Harry Reid came up with a plan that basically called the GOP’s bluff.

It’s a cuts-only bill (no tax revenue) that Dems believe will score $2.7 trillion in savings. But it will likely rely on a projected “peace dividend” — the expected drawdown of forces in Iraq and Afghanistan — and Republicans have indicated in the past they don’t support counting reduced war expenditures as savings.

“In an effort to reach a bipartisan compromise, we are putting together a $2.7 trillion deficit reduction package that meets Republicans’ two major criteria,” Reid said. “[I]t will include enough spending cuts to meet or exceed the amount of a debt ceiling raise through the end of 2012, and it will not include revenues. We hope Speaker Boehner will abandon his ‘my way or the highway’ approach, and join us in forging a bipartisan compromise along these lines.”

In other words, it’s everything the GOP has been demanding, and still they say No with cheese on it.

President Obama is going to address the nation at 9:00 PM EDT from the East Room on the debt ceiling. I don’t think he’s going to give the “This is bullshit” speech, but I wouldn’t be surprised if he basically told the Republicans to stuff it and put the pressure on them to come up with something that doesn’t stink of rank adolescent petulance.

*
By the way, if you think that the spending under the Obama administration is beyond the pale, let this chart from the New York Times present facts before a candid world. 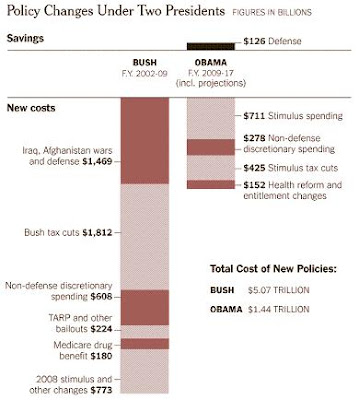 Tell me once again how President Obama is the one who blew up the economy.