Yesterday marked the 70th birthday of the Jeep. 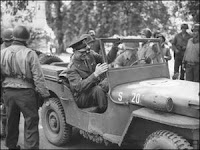 The little green go-anywhere, do-anything 4×4 vehicles soon began rolling off the assembly line at the former Willys-Overland plant in Toledo by the tens of thousands, and became an instant friend to Allied men and women in uniform during World War II.

After the war, the Jeep came home with many of those in service, and soon became a staple both on and off American roadways.

Today, while the original Jeep Parkway plant has been demolished, more than 2,300 men and women still work in Toledo at Chrysler’s Toledo Jeep Assembly Complex making the military Jeep’s modern descendants, the Jeep Wranger, Jeep Wrangler Unlimited, Jeep Liberty, and Dodge Nitro. Thousands of others from across northwest Ohio and southeast Michigan retired after spending part or all of their working lives building the vehicles so closely associated with Toledo.

Workers at the Toledo Assembly Complex are marking the actual anniversary Friday with notices on their plant monitors, and will hold a separate birthday party on Sept. 11, said Dan Henneman, Jeep unit chairman for United Auto Workers Local 12.

I had a Jeep vehicle for six years. It wasn’t the original CJ type, but a 1974 Jeep Wagoneer, which has rightly been described as the first SUV. The model hit the market in 1963 and remained basically unchanged in its design until it was dropped in 1991. In that time Jeep had gone through a lot of corporate changes, starting out with Willys-Overland, then Kaiser, then AMC, and finally Chrysler and all of that company’s many iterations in the last twenty years. 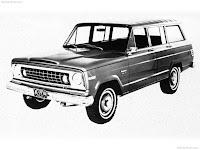 My Jeep was purchased used from Hawthorne AMC Jeep in Toledo in October of 1978. I had moved to Frankfort, Michigan, to work at a radio station and I needed a 4×4 to get around in the ice and snow of the Michigan winters. My brother found it for me. It was dark brown with a tan interior, a wood-grain stripe down the side, a V-8 engine, automatic transmission with Quadra-Trac, and air conditioning. I paid $5,000 for it, trading in my 1975 Ford Granada, and had the cheap radio traded out for my AM/FM eight-track. (Oh, shut up.) When I got it back to Frankfort I replaced the balding tires with four Firestone studded snow tires, and for the rest of the winter I was able to make it through all the heavy snow that winter.

It was a big gas guzzler (15 mpg on a good day), the engine was temperamental, the body rusted quickly, and by the time I got rid of it in December 1984 to get a Subaru 4×4 wagon, it was costing me a fortune just to keep it running. It had about 50,000 miles on it when I bought it, and I sold it after putting on another 50K, so I got some use out of it, but I spent more money keeping it running in six years than I’ve spent on my 1988 Pontiac in twenty-two.

But if you grew up in Toledo, you knew someone who either worked at the Jeep plant or helped run it. It’s been a part of keeping the city running in good and bad times, and while the old plant out near the Old West End is gone, the old smokestack with “WILLYS-OVERLAND” embedded in the bricks still stands as a mute monument to the little car that won World War II and kept a lot of people in Toledo at work.