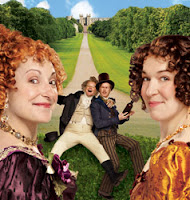 Each year that we come to Stratford, we make an effort to see something we’ve never seen before. That’s the case with Shakespeare’s The Merry Wives of Windsor; it was a new one for me.

Legend has it that Queen Elizabeth commanded that Shakespeare write a play about Sir John Falstaff in love. According to scholarship, that’s not exactly true, but it’s a nice little legend, and it explains how a character from Henry IV can show up in England some 200 years after his death in Henry V. In this play, Falstaff has been rebooted from the hard-drinking rowdy confidante of Prince Hal to become a broke and dissipated sot without much of a touch of Harry in the night. The only connection between the two Falstaffs is the name. In this case, Falstaff is not so much in love as he is in lust and looking for money, and since both desires can lead a man to foolishness, the women he has set his sights on use him as their foil.

This play also serves as an outlier in Shakespeare’s canon. It is the only play of his that takes place in Elizabethan England, in sync with Shakespeare’s own life. The characters aren’t named Antonio or Romeo, there’s no magic spells or ancient curses to be fought or heeded, and the plot isn’t based on a recycled story or rewrought history of English kings and dynasties (although it does contain elements of stories by translated by William Painter). It is, in many ways, a precursor to the comedies that would come along a hundred years later, after the time of Cromwell when public theatre was banned, and the stage was being restored and influenced by the Renaissance making its way to England from the continent. If you didn’t know it was Shakespeare, you would think you were seeing something by such writers as William Wycherly or John Dryden.

The plot is not all that different than a lot of Shakespeare’s previous comedies; there’s mistaken identity, disguises, attempts at adultery, and strong women who pretend to be at the mercy of the menfolk but are really the ones in charge. Of course there are young lovers who are determined to marry against their parents’ wishes, and of course it all ends happily, even if there are some loose ends left untied. (I guess even Shakespeare struggled with finding a good ending.)

The production on the Festival stage under the able direction of Frank Galanti is thoroughly enjoyable. Laura Condlin as Mistress Page and Lucy Peacock as Mistress Ford, are the nominal merry wives, and they have a great deal of fun. The plotting husbands are played to the hilt by Tom McCamus as Master Page and Tom Rooney as Master Ford. Geraint Wyn Davies hams it up well as Sir John Falstaff, who is treated more like the butt of jokes rather than the driver of the plot; he’s painted almost like Malvolio in Twelfth Night and even has a couple of goofy companions to round out the company. The thankless roles of the young lovers, Fenton and Miss Ann Page, are played with winsome charm by Trent Pardy and Andrea Runge, but as in most of Shakespeare’s comedies, they don’t get to have as much fun as the rest of the intriguers.

This is not your Henry’s Falstaff, but he’s still a basketful of laughs.