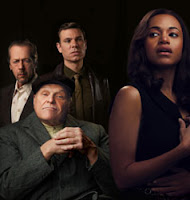 I remember sitting through numerous graduate school seminars in theatre where we plumbed the depths of every line in a Harold Pinter play, trying to come up with the inner meanings of his long pauses and seemingly disconnected simple phrases. The plots were deceptively simple, we thought, because there had to be something more. How else could Pinter achieve the total heaviosity that we were told was there?

Even after working on two different productions of The Birthday Party, one under the direction of Emily Mann at the University of Minnesota, I was sure that there was some greater depth to Pinter’s work than what we saw on the surface; maybe I had not achieved the elusive level of understanding, and all I saw was just the inane conversation between people I didn’t care about. But all the wise and insightful articles and critiques of his work hinted that there was much, much more. And so I sought it out.

Well, I finally figured it out yesterday at the hands of a truly great production of The Homecoming here at Stratford: Harold Pinter was a comic genius. Not in the fashion of the Marx Brothers or Mel Brooks, but in crafting characters and situations that really are truly comic. Instead of being menacing, Brian Dennehy gives Max, the patriarch of his dysfunctional collection of sons and brothers, a blustery tone in an almost Homer Simpson way that lets you appreciate his ineffectualness. His in-home sons Lenny and Joey are echoes of their father; Lenny, the seething and conniving pimp, and Joey, the muscular, inarticulate, slightly goofy boxer who lives for the moment. All of them are perfect for playing off each other.

As in all Pinter plays, there is a menacing intruder who disrupts the flow. In this case it’s the arrival of Max’s son Teddy, a professor of philosophy who lives in the U.S, and his wife Ruth, who immediately sizes up the family dynamic and plays each of the men like a fine Stradivarius. It’s all done in a claustrophobic set of a dingy home in London that cries out for more room, even after long-ago attempts to make the space bigger.

This production doesn’t play for the broad laughs; director Jennifer Tarver and her cast knew just the right touches to bring about the laughter — both broad and nervous — in this production. The casting is perfect, and Mr. Dennehy, who has a presence on stage that is both vulnerable and menacing in everything I’ve seen him in, is the quintessential English working class dad. Stephen Ouimette is always a delight to watch for his understated archness, and Cara Ricketts as Ruth is just plain fascinating. Kudos also to Ian Lake as Joey and Mike Shara as the seemingly dense Teddy, the professor who appears to not know what is happening right under his nose, but really does get it.

I suppose it’s rather Pinteresque that I learned more about Pinter’s work in two hours yesterday than I did in all those seminars way back in grad school. Who knew?