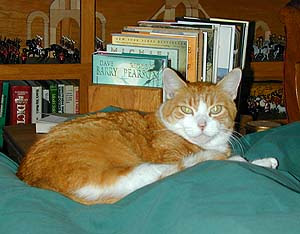 Skitz — 2001-2011
Bob called a little while ago to tell me that he had to take Skitz to the vet for the last time. She had been ill for the last couple of months, and at the end she was just refusing to eat and wasting away. I know that it was the best for her, and that Bob and Ken wanted to spare her the pain, but I know that she leaves an empty space in their home. They adored her, and she returned the love in ways only cats can.

Even though I grew up in a house with cats, I’m more of a dog person. But Skitz was my friend. Normally very shy in the presence of strangers, whenever I went to Bob’s house, she would see me and give me her version of a greeting: a shrug and occasionally a squeak. When Bob and Ken traveled, I would stop by the house to feed her, and while it was rare for her to greet me as I came in — she had her favorite places elsewhere in the house — she would come out as I put out the food and querulously inquire as to when the food would be ready.

My lease doesn’t allow pets, and nothing could replace my Sam, but if I ever had a cat, I would want one like Skitz.