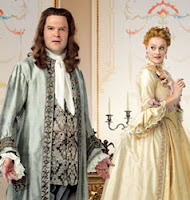 Honesty may be the best policy, but it doesn’t always work in politics and in affairs of the heart. At least that seems to be the point in Molière’s brilliant and stylishly-produced comedy The Misanthrope at Stratford.

The story centers around Alceste, a man who has vowed to speak frankly about his opinions, foregoing the niceties of 18th century Paris society where politeness and social amenities are the Rule. It gets him into trouble with his friends as well as the woman he loves, and even when his honesty is put to the test both in court and in winning his love, he has to pay a price.

The timelessness of the play doesn’t hurt, either. Today we seem to be awash in people offering their unvarnished opinions of everything, from (ahem) bloggers to the cult of personalities that develop around the folks on cable TV who claim to speak their mind and damn the consequences. Everyone from Glenn Beck to Rush Limbaugh to Keith Olbermann to presidential candidates holds forth and frequently get in trouble for their candor. And, as Molière proves in this play, it often becomes less about the moment of truth than it does about the person speaking it. Rather than “listen to what I’m saying,” it becomes “listen to ME!” And when honesty becomes secondary to personality, both lose.

The production at Stratford is beautiful in all respects. The Festival stage is a gilded wedding cake of a Paris home at the hands of designer John Lee Beatty, and the costumes by Robin Fraser Paye are equally stunning. The translation is by Richard Wilbur, done in rhyming couplets, and it captures both the voice and the taste of the era in its wit and charm, and it is deftly directed by David Grindley.

The performances are all stand-out, including Ben Carlson as Alceste and Sarah Topham as Célimène, his love interest and exact opposite when it comes to social decorum. The pace is quick, the staging choreographed beautifully, and the points of the story are rapier-like, not cudgeled. Stratford may be renown for its productions of Shakespeare, but they know how to do a comedy of manners as well.