My latest addition to my very small art collection: 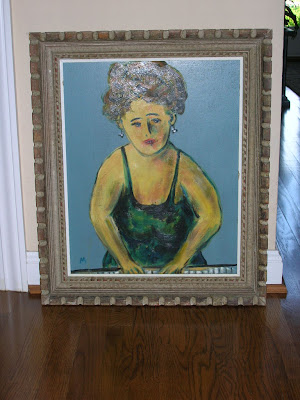 Story below the fold.

It is a painting of Rosie Mayhew of the Liberty Inn in Chicago. The painting was a gift to Ruth Bailey Swigart from Alex Maley of Honor, Michigan, in 1964.

Ruth Bailey Swigart was the founder and producer of the Cherry County Playhouse in Traverse City, Michigan. She ran the summer stock theatre from 1955 until 1976, when she sold it to comedian Pat Paulsen and Neil Rosen, a TV producer from Los Angeles. She had a summer home near our family’s place in northern Michigan, and she knew of my love of theatre. In 1970 she gave me my first professional (as in working on a professional stage, but unpaid) role in theatre in a production of My Daughter, Your Son with Vivian Vance. We remained friends for the rest of her life.

When she passed away, her summer home went to her relatives, and the furnishings — including the painting of Rosie — stayed with the house. Earlier this year, however, the house was sold and Ruth’s memorabilia was dispersed to family and friends. The painting arrived at my parents’ house in Perrysburg as a gift from the family to me.

I’m no art historian, so I don’t know if Mr. Maley was the artist or if he just presented it to Ruth “with applause,” as it says on the back. I also don’t presume to be a critic of art. I can’t speak to the style or the technique or judge whether it’s good or bad. (The somewhat odd placement of the eyes, which seem to come from the Alfred E. Neuman school, are mesmerizing.) But it is a nice remembrance of Ruth and the start she gave me in theatre.